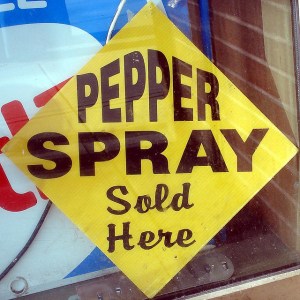 Last night an overzealous shopper at a Walmart near Los Angeles used pepper spray on a crowd in an effort to get at a stash of heavily-discounted Black Friday gadgets.

Around 10:20 on Thanksgiving night, the unidentified woman shot pepper spray inside the store when the coverings were lifted off items she intended to purchase.

“Somehow she was trying to use it to gain an upper hand,” police Lt. Abel Parga told The Associated Press.

The use of the chemical agent appears to have set off a small panic in the store, resulting in 20 minor injuries, according to fire department officials who said that “rapid crowd movement” was to blame for the injuries.

The store remained open after the incident, and people on the scene continued to shop, though many probably wish they had made their purchases online instead.

The woman fled the scene, according to police, and we can assume she didn’t get her Black Friday discounts.