Jamil Moledina envisions a future in which all games are cross-platform. And to help make that future a reality he left a job at video game giant Electronic Arts to take on the role of vice president of business development at social games company Funzio.

Moledina was formerly the director of business development for the EA Partners program, which included forging relationships with development talent to publish games across a variety of platforms. Prior to that he served as executive director of the Game Developers Conference and editor-in-chief of Game Developer magazine. His new role is much less defined, he says, likely due to the fact that the company is much smaller than his previous employers.

That startup mentality is part of what attracted Moledina to the company. But it was also Funzio’s focus on cross-platform development, a concept that aligned nicely with Moledina’s own views on where the games industry is headed.

Funzio’s first release, Crime City, has been successful across three platforms, garnering millions of users across Facebook, iOS, and Google+. The iOS version of the game is frequently listed amongst the top 10 grossing apps in Apple’s App Store.

“This was incredibly illustrative to me of what this company has been able to do,” Moledina told VentureBeat of Funzio’s cross-platform success. “There’s competing conventional wisdom out there that speak to the fact that you must make a mobile game that is specifically tailored in technology and community and design to the mobile market. But what Funzio showed was that you could create a universal design that works on multiple social platforms with a high degree of monetization and success.”

From Funzio’s perspective, it seems that Moledina’s diverse background is what made him a good fit for the company.

“He brings a broad range of strategic skills from the game industry,” Funzio CEO Ken Chiu said in a statement, “both in terms of sourcing and analyzing innovation, as well as creating successful businesses from emerging market opportunities.” 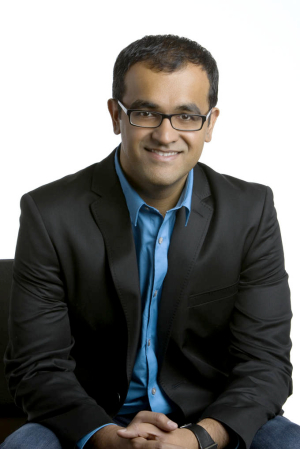 Like a number of developers, Funzio is targeting its games at the emerging mid-core market, which features more accessible gameplay coupled with traditional game themes and deeper game elements. Crime City combines elements of social city building games with deep role-playing mechanics, all set in a mafia-themed world. The company’s upcoming release, Modern War, will do something similar but within a military setting.

Moledina says that these types of themes — war, crime, etc. — are so popular amongst developers for the simple fact that they’re already proven.

“As much as we are about pioneering certain aspects, one of the things I learned at EA is that it’s never good to have too many pioneering [aspects] in a game because there’s certain things that people expect,” he said. “The crime genre is proven as a mass market entertainment genre.”

With three big platforms already tackled, Funzio is now investigating and working on development for the Android platform, though no specifics have been announced. The company is also looking into potentially utilizing new technologies — current games are being developed with Flash — including HTML5.

“We are very interested in how HTML5 develops and the potential of the technology,” Moledina said. “For us we’re not necessarily married to any particular technology. We’re much more interested in ways to present pioneering games to the social market.”

Beyond those two games Funzio doesn’t have any announced projects, though Moledina says that the company’s future roadmap includes what he describes as “pioneering” social games. We don’t know any specifics, but the roadmap helped convince Moledina that Funzio was the right place to be.

““It was one of the most interesting things I’d seen in about a decade in the games industry.”