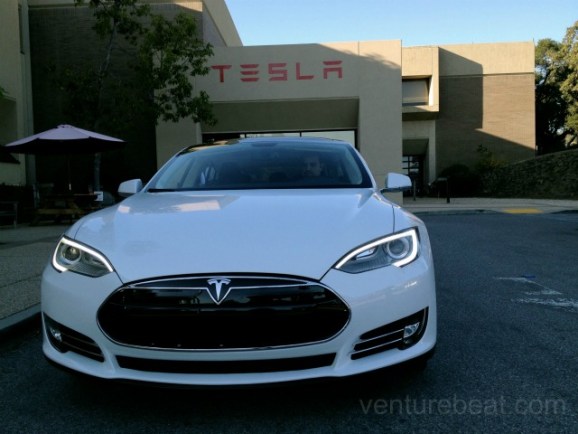 Black Friday shoppers on the market for an electric car might want to drop by a Tesla showroom this weekend. The company has put its vehicle technology on display, with prototypes of the new Model S Beta electric sedan appearing in stores around the U.S. and Canada.

The technology tour will be rolling out in selected cities across the country, showing off the vehicle’s drive train and electric motor, as well as the battery pack, front suspension and rear drive unit.

The idea is to let people get up close and personal with the new car, and experience an electric car not as some luxury toy, but as something they might one day own.

“Tesla stores are designed to let people explore and learn about Tesla’s technology for themselves,” said vice president George Blankenship, in a statement. “You’ll never see a ‘Don’t Touch’ sign in a Tesla store. We want everyone — from kindergartners to grandparents — to come in and see for themselves why driving electric is the future.”

Blankenship was hired by Tesla to design its retail facilities after successfully contributing to the signature look of Apple’s retail stores. He was Apple’s vice president for real estate from 2000 to 2006.

The Tesla Model S Beta is the first mass-market electric car produced  by the company, whose headquarters are in Palo Alto, CA. The first Model S Beta units will be on the streets in 2012, and the company has taken orders for more than 6,500 pre-orders, selling out completely. VentureBeat recently visited the Palo Alto facility, and we got to test ride the new Model S.

What makes the Model S different from the company’s earlier vehicle, the Tesla Roadster, is that it looks like a regular sedan, and is built to seat seven people, five adults and two kids. It’s also priced like a normal car, starting at about $49,000. By contrast, the Tesla Roadster was a two-seater sports car and had a sticker price of $112,000 and up.

Even with a price tag that makes owning Tesla Model S more affordable, don’t expect any Black Friday madness at the Tesla store.