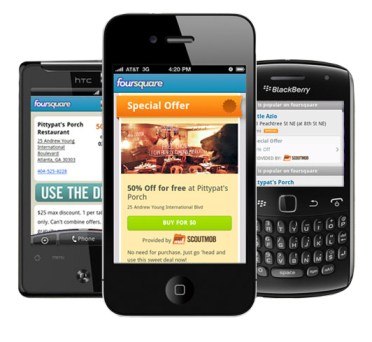 Two great mobile apps have gotten together to make deal-hunting and city exploration an even better experience, as Foursquare has integrated Scoutmob deals.

Scoutmob is a deals app for iPhone, Android and BlackBerry that lets users claim deals only once they’ve reached a destination. Two things make Scoutmob distinctive: One, customers don’t pay Scoutmob to get these deals, they just press a button and receive the deal as an e-mail coupon; and two, the designers of the app and website are obsessed with mustaches (they’re everywhere).

Foursquare is the leading location-based check-in service for smartphones, with more than 10 million users. The tie-up with Foursquare suits location check-ins, because they happen at the push of a button, just like claiming Scoutmob deals.

“Paying for a deal on a third party app in Foursquare’s app is not a great user experience, and the Foursquare guys will tell you that,” Scoutmob co-founder Michael Tavani told VentureBeat. “Our deals will integrate with their system a lot better. I think it will be a better user experience for what users of Foursquare are already familiar with.”

ScoutMob has integrated its local deals with other services in the past, such as Foodspotting, a visual guide to local food that features user-contributed photos of dishes.

Scoutmob is based in Atlanta and its deals are currently available in 13 cities, with seven more coming online soon. Scoutmob has more than 800,000 users.

“Of all the deal integrations we’ve done, the Scoutmob partnership most closely aligns with our own Specials format, where no payment is required to redeem deals spontaneously,” said Tristan Walker, Foursquare’s director of business development, in a statement.

Tavani says that another reason why he’s excited about partnering with Foursquare is because the majority of Foursquare check-ins happen at a restaurant or a retail location. Scoutmob deals are heavily weighted towards restaurants and retail locations, with 75 percent of their deals inventory concentrated in dining establishments, and the rest at shops and merchants, Tavani says. This further differentiates it from many other deals providers that are trying to sell to customers based on location.

“Doing teeth whitening or whatever doesn’t work so well for Foursquare,” says Tavani. He also said that the deals in the Scoutmob inventory aren’t flash sales that must be purchased within a one or tw0-day window. All Scoutmob sales expire three or six months after they begin.

Foursquare has been serving up daily deals on its platform for some time, but with mixed results. In July the company partnered with Groupon to offer real-time, location-based deals. This arrangement may not have done much for either side. Groupon earned just $2.6 million from Groupon Now offers in its first six months. Foursquare also inked real-time deals agreements with LivingSocial, Zozi, Gilt City and now-defunct BuyWithMe. Gilt Groupe purchased BuyWithMe after the  deals site failed in its bid to compete on a national level with Groupon and LivingSocial. Foursquare recently unveiled an update to its website that brings location-based deals and other offers to the desktop.