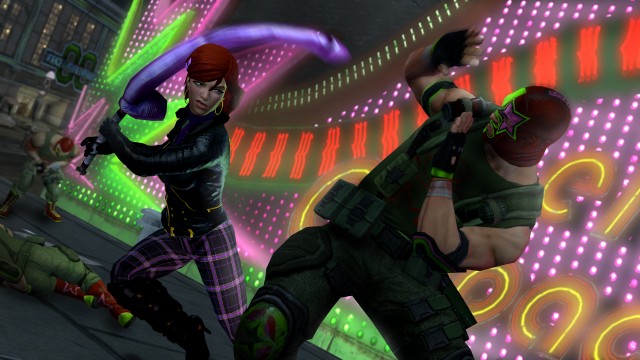 Saints Row: The Third, the latest third-person action game from developer Volition and publisher THQ, blasts its way into the hectic Winter gaming marketplace, with more spectacular set pieces than a blockbuster movie, a huge array of customization options, and absolutely no sense of shame whatsoever. Following the two previous Saints Row titles, this latest installment lets you play the leader of the 3rd Street Saints, who are embroiled in a turf war with The Syndicate, a rival criminal gang in the fictional city of Steelport. Playing out in an open-world environment that encourages exploration, experimentation and general goofing around, the game makes clear its intentions from the beginning, namely to provide gamers with an exciting, fun and downright crazy experience, albeit not one for the easily offended. No longer just a street gang, the Saints are now a full-fledged crime syndicate. 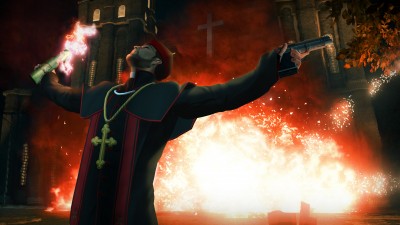 Who do you want to be today?

Following the game’s first mission, you arrive at the character customization screen, and get to create the leader of the Saints, whom you will play as for the duration of the story. The range of customization options available invites you to be creative, with a generic action hero type being one of the least attractive options. Everything from permanent tattoos to double chin height is definable, and there is a range of skin tones that can make your character look more like something from a comic book, than a traditional action game.

In the custom settings, there is a cheeky option to alter ‘sex appeal’, which essentially reduces something that psychologists have argued about for decades, to the simple act of enlarging a man’s manhood, or a woman’s breasts. While that particular option is not subtle, there is no doubting the overall depth of the effects on offer, when you see some of the creations that the Saints Row community have come up with. (THQ released the avatar creator early to get the community stoked) As well as new unique characters, users have managed to craft realistic models of Marlon Brando in The Godfather, Lara Croft, and Peter Griffin from Family Guy, to name but a few. Personally, I was quite happy with the Mohawk-touting cross between Tony Soprano and the Silver Surfer that I managed to piece together in about ten minutes.

Dressing your character is also a mini-adventure in its own right, with a basic range of clothes available to begin with, plus more that can be unlocked through completing missions or shopping in the Saints stores. From wristbands and glasses, through to giant monkey masks and gimp suits, there is literally something there for everyone. If you don’t wish to show off your sartorial elegance, however, you can always choose to run around Steelport in the buff, with some carefully placed pixelation hiding the more personal details. In true Saints Row style, Volition has even built-in a side mission that requires you to shock passers-by, by streaking near them. 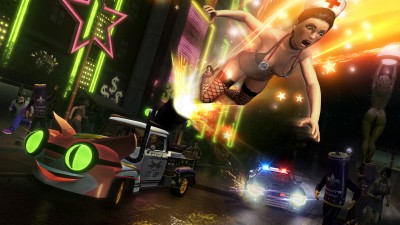 While playing through the first few missions in Saints Row: The Third, you soon come to realize that the game won’t be forcing you to do anything dull. Barring a few more low-key events, the missions are generally bold, brash, funny, and chock full of gun-fights and explosions. As you progress further through the story, the missions get exponentially more insane, along with the weapons and vehicles that you can use to complete them.

Volition has certainly taken a refreshing approach in the making of Saints Row: The Third. While some games are striving to reach new levels of realism and immersion, Saints Row is quite content just to be a game, and in doing so it offers some really crazy experiences, that simply could not be reproduced in any other medium. Without wishing to proffer too many spoilers, some of my personal highlights included parachuting into a nuclear reactor, beating a masked wrestler around the head with a giant shark, causing waves of ‘infected’ citizens to explode with a gun ripped from a virtual reality game, and a gloriously inappropriate use of the Joe Esposito song “You’re The Best Around”.

Whilst you start Saints Row: The Third with a limited arsenal of weapons, over the course of the game you accumulate some incredible pieces of technology, and can also upgrade some very basic weapons to be devastatingly effective. I found nothing more satisfying than sending a room full of enemies into a coughing frenzy with a casually tossed ‘fart in a jar’, before mowing then down with a pyrotechnic sub machine gun. Other personal weapons of choice included the RC Gun, which allows you to take remote control of any vehicle and explode it at will, and the sex toy bat, a giant purple dildo which is a particularly effective means of bludgeoning people around the head.

The gunplay in Saints Row feels pretty tight, with the third-person view working no better or worse than it generally does for shooting. There is no cover system in place, which is quite rare to see in a third person shooter these days. Whilst it is nice to be free of the problems a cover system sometimes brings with it, it does sometime feel like you are a sitting duck at a carnival sideshow, with nowhere to hide and bullets flying at you from all sides. Having said that, Saints Row is anything but a stealth game, and the best form or defence is usually attack, something which is eminently satisfying here, as bodies and vehicles fly around, amidst seas of explosions. 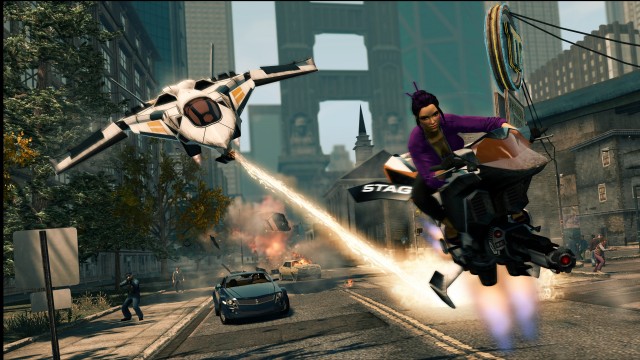 As you would expect from a Saints Row game, there are a vast range of vehicles that you can buy, steal and modify. These range from high speed police cars, to motorbikes, street sweepers, fire trucks and aeroplanes. In keeping with the general spirit of chaos and abandon, you can also get your hands on some futuristic technology, such as a TRON style motorcycle, a hoverbike, and my personal favourite, the 8-bit tank. These vehicles can be stored at your crib, and taken out whenever you want. In addition, a quick phone call can bring a chosen vehicle to you, wherever you are in the city. This is a really neat touch, and the option to instantly call up a VTOL jet, fly across the city, and free fall to your chosen destination beautifully highlights the emphasis on fun over realism in Saints Row: The Third.

Driving and walking around the city of Steelport feels great, with a variety of characters hanging out on each street corner, and nearly endless possibilities for causing mayhem. Taking to the skies, however, the game loses some of its charm, particularly in terms of visual fidelity. When up in the air, much of the graphical detail gets removed from the game, and this is quite noticeable, to the point where cars will instantly pop out of view if you fly above a certain altitude. When you are left looking at just skyscrapers, you will also notice that the visuals can be a little rough around the edges, with the city itself having a slightly cloudy feel to it.

Some of the helicopter sequences also seem a little forced, as if playing out a pre-rendered scene and doing what the game wants you to do, rather than directly controlling events yourself. This seems more noticeable during some of the earlier missions, one of which I replayed several times, finding that the choppers appeared to explode in identical places each time, so long as I was shooting in their general direction. 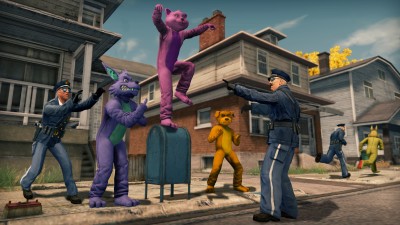 Saints Row: The Third is fundamentally a single player experience, with the main campaign clocking in at around 15 to 20 hours. In addition, there is also an option to play through the campaign online with a friend. When playing in co-op, the host controls the main story, with only side missions and unlocks carrying through to the visiting player’s game. It is great fun to team up with a buddy, grab some vehicles and goof around, but it never feels essential to have that back-up when playing through the story missions. It is lucky that there is so much else to do in the game, besides following the story, as it makes the co-op feature one that is definitely worth exploring.

The final addition to the package is the much discussed Whored Mode. Yes, you read that right. Whored mode takes you through waves of enemies, either solo or in co-op, with each round offering a new twist, to keep you on your toes, and keep the madness coming. At times you may find yourself playing through a drunken stupor, facing off against an army of dildo-wielding gimps, or battling as a miniscule version of yourself. While Whored Mode is initially entertaining, with its low difficulty level and rounds that can sometimes be over in seconds, the fun wears off a little quicker than perhaps it should.

Saints Row: The Third plays like a twisted love letter to video game culture. Volition has created a game in perhaps the purest sense of the word, in which the player is free to explore and have fun, without being forced to replicate any of the mundanities of real life. With some outstanding action sequences, a huge variety of weapons and vehicles, and a craziness that can outdo any other game around, Volition has definitely delivered the goods, despite a few niggles. While Saints Row: The Third is not likely to win any ‘Game of The Year’ awards, I can safely say that it provided me with more genuine fun that any other title this year. That can only be a good thing, and I am giving Saints Row: The Third 82 out of 100.