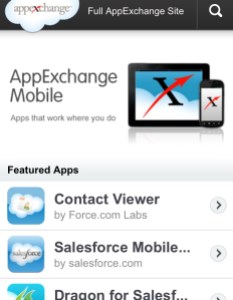 For Salesforce, a cloud business software giant, the revamped AppExchange will be a useful avenue for suggesting cloud mobile apps to its users — something it previously didn’t have before.

The AppExchange has been around for five years and has generated over 1 million installs, Salesforce’s Mike Rosenbaum, VP of the app marketplace, told VentureBeat in an interview today. Currently, there are over 1,300 apps featured on AppExchange.

With the new design, you can visit the AppExchange on your iPhone, iPad, or  Android phone or tablet and be presented with a selection of apps compatible with your device. When you click through to install an app, you’ll be redirected to either the iTunes Store or Android Market. There’s also an HTML5 app featured that simply pushes you to a website (expect more of these in the future).

One glaring omission from the redesign: support for BlackBerry devices. Rosenbaum says that Salesforce is considering BlackBerry support, but a dearth of useful cloud apps kept it from supporting the platform early on.