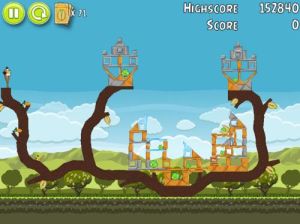 The free-to-play, five level promotional game — playable on a subsection of AngryBirds.com — features the now-ubiquitous, titular birds launching at both pigs and nuts hiding in half-separated pistachio shells. The game also has branded backgrounds including a pistachio orchard and a football game with nuts as snacks. A set of recent TV ads also feature the birds launching at nuts to crack them open.

The game serves as a sort of stealth marketing for Google’s Chrome web browser. Trying to load the game on other browsers and mobile phones brings up a prompt that tells players the game is “optimized” for Chrome, and then directs them to download the browser.

“The ubiquitous consumer adoption of Angry Birds and pistachios makes this partnership a natural fit,” Wonderful Pistachios North American senior director of marketing Marc Seguin said in a statement. “We’re excited to give consumers the snacks they crave with pistachios and feed the frenzy for new Angry Birds content with the launch of this game.”

To help draw attention to the promotion, players that share the game on social networks or find hidden “Golden Pistachios” hidden within the later levels can qualify for part of a $300,000 prize pool. Those prizes include cash, Angry Birds plush toys and a year’s supply of Wonderful Pistachios. Though the contest ends on December 31, the game will remain playable into 2012.

This isn’t the first time a popular mobile game maker has created a new version that’s dedicated to cross-promoting an existing product or brand. Doodle Jump maker Lima Sky promoted the Easter-themed movie Hop with a branded version of the game, while Halfbrick’s Fruit Ninja series just recently saw a Puss In Boots-flavored release alongside that feature film. And, let’s not forget that Angry Birds Rio was a promotion for the bird-themed children’s film Rio, which drew 10 million downloads in ten days after its March release.