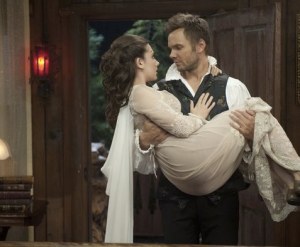 Hulu and Netflix are embroiled in a melee over digital content rights to the most popular TV shows. Friday, Hulu landed a blow by announcing that it is now the exclusive digital syndication partner for the Emmy award-winning television comedy series Community.

Hulu already carried Community, and Netflix didn’t. The exclusivity deal means that Netflix and other streaming-video rivals are now frozen out of this show.

Community is a B-list get for Hulu, and it’s certainly not going to bump up the site’s Hulu Plus subscription numbers. The subtext of the announcement, however, is important.

Essentially, Hulu is telling the industry that it can still obtain critical content deals and differentiate itself from the competition — which is, of course, Netflix. On the gradeschool playground, today’s news blurb would be akin to Hulu sticking out its tongue at Netflix and saying “neener-neener-neener.”

But a get is a get, especially when you consider Hulu’s new deal with the CW and the service’s new availability on Nintendo Wii and 3DS.

Hulu, which recently abandoned a quest for a buyer, is giving Hulu Plus subscribers next-day access to current season episodes, along with the entire back library of Community spanning all three seasons. Non-paying Hulu watchers can stream the five most recent episodes, as usual.