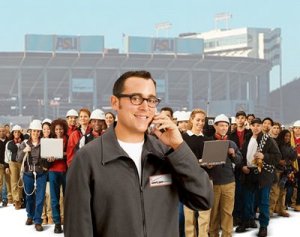 In a bid to shore up its 4G wireless network, Verizon has agreed to buy 122 wireless services licenses from Comcast, Time Warner Cable and Bright House Networks, the company announced today.

Comcast, Time Warner Cable and Bright House Networks initially set up a wireless venture called SpectrumCo in 2007. But because the venture didn’t turn into anything substantial, the companies are cutting their loses and selling the assets to Verizon. The deal stipulates that Comcast will receive $2.3 billion, Time Warner Cable will get $1.1 billion and Bright House Networks will bank $189 million, based on how much ownership each company had in SpectrumCo. The SpectrumCo companies actually bid $2.4 billion for the spectrum in 2006, so Verizon is paying a $1.2 billion premium for it.

If U.S. regulators approve the move, Verizon will own much more spectrum, as the assets cover 259 million Americans. The goal would be to give more Verizon customers across the country its 4G LTE service, which is already the largest next-gen 4G network. The U.S. Government plans to open more of its wireless spectrum to mobile operators at an auction, but Verizon is preemptively moving ahead of that to secure itself spectrum.

“Americans deserve excellence from a wireless service provider, and innovative wireless companies plan ahead in order to deliver on that expectation,” Dan Mead, President and CEO of Verizon Wireless, said in a statement. “Spectrum is the raw material on which wireless networks are built, and buying the AWS spectrum now solidifies our network leadership into the future, and will enable us to bring even better 4G LTE products and services to our customers.”

The deal, pending approval from a highly regulatory FCC and DOJ, would put a ton of pressure on AT&T, which already is behind Verizon in building out a true 4G network. Verizon offers 4G LTE in more than 150 U.S. markets. AT&T (and T-Mobile) mostly offer up HSPA+ as its version of 4G, which delivers faster speeds on already established 3G networks. That said, AT&T now has LTE live in nine markets in the U.S. and plans on steadily adding more.

AT&T is also struggling right now because it is looking less likely that its proposed buyout of T-Mobile will happen. The FCC has blasted the potential AT&T-T-Mobile merger in a 157-page report that ultimately concluded that the merger would ultimately hurt U.S. consumers. AT&T and T-Mobile-parent Deutsche Telekom have actually withdrawn their FCC application for the merger, so the company’s may also be planning to lose this fight.