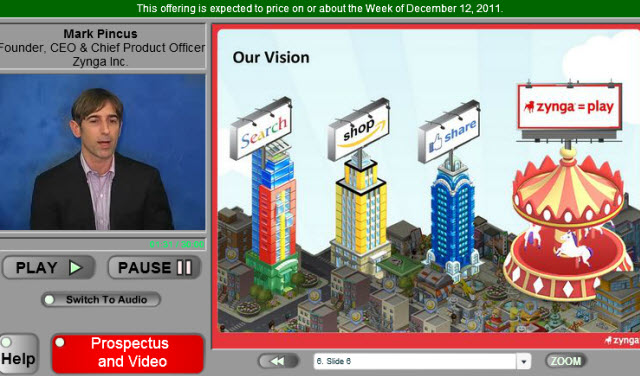 Zynga has posted its pitch to investors for its upcoming initial public offering roadshow. The pitch is part of Zynga’s plan to raise $850 million to $1.15 billion in an IPO that values the company at $5.9 billion to $6.99 billion, or $7.6 billion to $8.9 billion including employee stock options.

Zynga will deliver this 30-minute roadshow pitch to investors over the next nine days. The company is expected to price its shares — now at a range of $8.50 to $10 a share — on Dec. 15 and begin trading as early as Dec. 16.

In the video, chief executive Mark Pincus explains the company’s mission to “connect the world through games.” Pincus says that “Play has become a core internet activity and is the fastest growing activity on mobile.” He says Zynga is the leader in play, has a scalable platform and a repeatable and profitable model, and that its investment in social games is unmatched.

“We built the only scalable platform for social gaming, and it delivers powerful network effects,” he said.

Pincus said that players are investing time in their hobbies and expressing themselves through play. Zynga’s CityVille is the most popular social game in the western world, with 58 million daily users, Pincus said. He said a year ago Zynga grew CityVille to 20 million daily active users quickly because it was instantly social and leveraged the Zynga tech stack.

Pincus said the company picks a category that will be popular with users, designs an accessible game that is easy to play, adjusts the game based on the data feedback, and grows it through powerful network effects. Pincus said the company has created 9 of the 10 largest social games of all time, with 227 million monthly active users, 54 million daily active users, or more players than the next 14 game companies combined on Facebook.

He said that social gaming will double to 1 billion users in the next five years, that about 18 billion apps are being downloaded and that will quadruple, and about $9 billion is spent on virtual goods now, a number Zynga expects to triple in five years. Pincus said Zynga invested $500 million in the past year alone.

John Schappert, chief operating officer, said there are 1 billion social network users among the 2 billion internet users. Zynga has a $1 billion slice of the $9 billion virtual goods market, which is a slice of the $49 billion gaming software market and the $1 trillion entertainment market.

“We believe it’s the most powerful business model in entertainment,” Schappert said.

The company generates about a quarter of a new game before launching it, then continues to develop it over time. Players stay engaged for years, not just days or months. The free-to-play gaming model means players play for free and pay real money for virtual goods on an ongoing basis. For instance, players can call in an air strike in Zynga’s Empires & Allies game for 50 cents, or pay to join the VIP club in Zynga Poker for $5 a month.

Zynga games have been No. 1 on Facebook since January 2009 and the company currently has four of the top five games. One of them is Zynga Poker, which is four years old.

On mobile, Zynga had 11.1 million daily active users in October, up from 991,000 a year earlier. That’s a much smaller share of the overall mobile gaming market.

Zynga’s ad revenue is $55 million, up 162 percent from a year ago. Advertisers include Best Buy, which had a campaign where players in CityVille built 8 million new Best Buy stores in the game. Ads are just 5 percent of total revenues now, but are growing. The ads can be inserted long after a game launches. FarmVille launched in June 2009, but its Lady Gaga sponsorship was launched in May 2011. 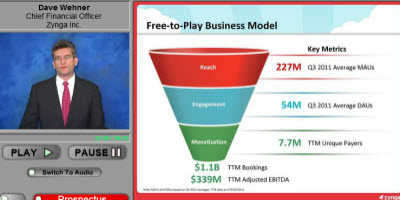 “Our games live on for years, and bookings continue to grow long after launch,” Schappert said.

Schappert said Zynga is a metrics-driven company and uses data to determine everything in its games. It constantly runs A/B tests. The company tested a new marketplace in FarmVille and saw a 9 percent increase in bookings simply because its appearance was better looking.

Schappert said the company will launch new games, enter new international markets, expand to new platforms from Google+ to Tencent to Zynga.com, and grow its markets in mobile.

“Why now?” Schappert asked. “We are entering the most active launch cycle in the history of the company.”

Dave Wehner, chief financial officer, said that Zynga has had 8 million customers buying virtual goods in the past year. Bookings grew 43 percent year over year in the first nine months of the year. He said FarmVille delivered record revenues in the ninth quarter after its launch, an indication of the longevity of Zynga’s games.

Older games continue to deliver as much revenue in 2011 as they did in 2010, Wehner said.

“In the last 12 months, we’ve made substantial investments in our development pipeline,” he said. R&D has expanded 2.5 times in the last nine months. Spending on infrastructure was $199 million, up from $62 million in 2010, as the company shifted from rented servers to Zynga’s own data centers, dubbed the zCloud.

Correction 12/3/2011: We’ve corrected the valuation figures to include the value of employee options.