On Skillville Games, players can play casual games from Solitaire to Break It, betting small amounts of money in matches against other players. Players sign up and play tournaments in an asynchronous fashion, jumping into a round when it suits their own schedule.

The company has had a beta site working for about 1.5 years under the SkillAddiction name. Thebeta’s metrics are good, with 80,000 registered users signed up. In November, players waged about $30,000 of their own money. About 10 percent of customers are converting to paying customers. About 65 percent are retained on a monthly basis. The top 20 percent average revenue per paying user is about $170. Players stay on the site — whose tagline is “game better, win more” — for an average of 30 minutes. 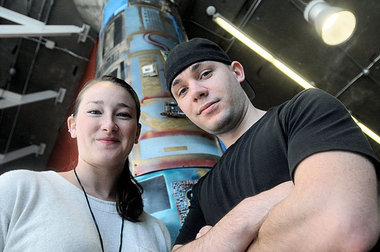 Skillville Games was first conceived of as SkillAddiction by two Syracuse University students, Taylor Louie (pictured left) and Raymond Williams (pictured right). They had been playing on competing web sites for more than a year and had won $4,000 in prizes. They decided they could create a better skill-gaming experience, with less fraud and more fairness. Using their winnings and other funds, they set up a beta site 18 months ago. They got other hardcore skill-gaming players to contribute their knowledge. Then they relocated to Silicon Valley and went through the YetiZen accelerator program in San Francisco.

“We’ve had more than 1.5 million skill tournaments so far,” Williams, chief executive of Skillville Games, said in an interview. “We think this niche is under-served.”

They were part of YetiZen’s first graduating class in August. The incubation program brought in gaming experts to help advise the startup and got a small percentage ownership in return.

Skillville has five full-time employees and as many as eight working on the project. Skillville Games is looking for a round of seed funding. The founders have already put $58,000 of their own money into it. The site has 35 games available.

Some of the rivals are big. They include King.com, Worldwinner.com, and Game Duell. Skillville hopes to outdo them with better service. The company has a dynamic ranking algorithm that ensures players are fairly matched and are never forced to leave because they have achieved a rank that is too high. The company also monitors security closely for any scams, bots, and cheaters. Skillville has a dual currency model and meta game that improves player engagement and monetization. For $5 a month, premium members get access to cash tournaments, premium free roll tournaments (no entry cost and a cash prize), and access to Skillville’s Scavenger Hunt with more than 1,000 prizes.

Here’s a video of Skillville Games in action. The first 50 players who send an email to rewards at skillvillegames.com can get 50 free skill tokens when they register and get 50 percent off their initial deposit to become a premium member. Upon initial deposit, players can get 500 more skill tokens.