Free houses, infinite XP, unlimited magic … the list goes on. The Elder Scrolls titles are notorious for being overrun with bugs and glitches. Even the patch that was supposed to patch the game now needs its own patch. But not all of these imperfections are necessarily bad. In fact, a few can be quite humorous, or more importantly, allow the player to reach otherwise-insurmountable wealth and power. Plus, even as Bethesda continues to fix/break the game further, you can always delete the patch from your hard drive whenever you want to use a specific trick.

If you used to be a great adventurer before taking an arrow to the knee, these handy tips, secrets, and downright shameful exploits will get you back on your feet in no time.

Once you’ve become a master enchanter, you’ll be able to drastically improve your weapons and armor. But with a little number-crunching, you can actually do much more than that. By increasing the Enchanter perk to 5/5 and purchasing the Insightful Enchanter perk, you’ll be able to decrease the cost of spells by up to 25% or more, per enchanted item. By enchanting a full set of armor, as well as a ring and amulet, you can decrease the costs of spells from a specific discipline to zero, meaning unlimited casting.

But wait, there’s more! As a limited time offer, you can get twice the infinite spell-casting ability for the price of one! That’s right, if you order before Bethesda decides to patch this, you can use the Extra Effect perk to put two enchantments on any one item. This trick will come in handy when…

Raising a magic skill such as Conjuration or Restoration to Master rank (level 100) takes countless hours of in-game playtime. But as with any Elder Scrolls title, there’s a way to expedite the process to as little as an hour of mindless grinding. Make sure you have the Mage Stone activated to gain skill experience 20% faster. Resting in a bed (especially one you own) will also add a temporary experience bonus (don’t fast-travel or you’ll lose it), as will resting with your spouse. 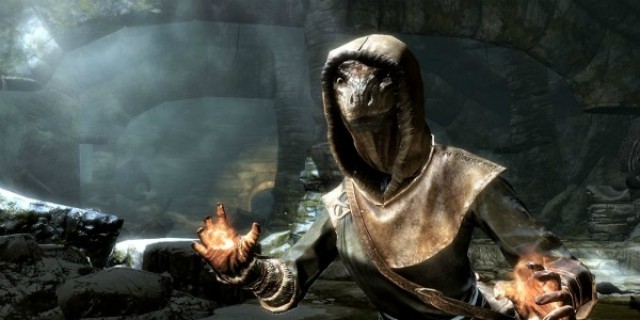 Are these power-leveling exploits still not fast enough for you? Or perhaps you’re more the warrior/thief type? Then say hello to my little friend: Oghma Infinium, the most game-breaking glitch of them all. Hopefully you haven’t already completed the Discerning the Transmundane quest and used the Daedric artifact that you’re rewarded with.

Watch the following video for a quick and easy explanation on how to max all of your skills out at 100 in mere minutes:

Skyrim’s first–and perhaps most humorous–exploit to go viral was a little trick involving buckets. By taking a bucket or cauldron and placing it over the head of almost any NPC, they become completely blind to any criminal act you may commit in their presence. See the attached video for a few examples.

While this is now old news, there’s a lesser-known addendum that will make selling all your newly-acquired stolen goods a bit easier.