Whenever you steal an item, regardless of whether anyone sees you or even if its owner is dead, that item will be flagged as stolen. You won’t be able to sell it to normal shop owners and if you get arrested, all of your stolen inventory will be confiscated by the fuzz (even if you pay off your bounty).

Currently the only ways to rid yourself of stolen items are to consume them (food/potions), disenchant them, mix them (ingredients), or sell to a fence by joining the Thieves Guild. You can also increase your Speech skill to unlock the Fence perk at level 90. To do this you can easily exploit a dialogue loop with a character in Riften. Remember that Speech is part of the Thief’s skills, so make sure you have the appropriate stone equipped before starting.

However, you can also remove the stolen status altogether, permanently rendering your pilfered wares legitimate. By dropping items on the ground in front of people who like you (people you’ve done deeds for, usually), they will sometimes pick the items up and give them back to you. When this happens the stolen status is wiped from the item. Unfortunately, through my testing I found this to rarely be reliable, as most of the time people will just stare at you, or guards will harass you for dropping your crap everywhere. In some cases, passersby will snatch up your goods and ask you if they can keep it. 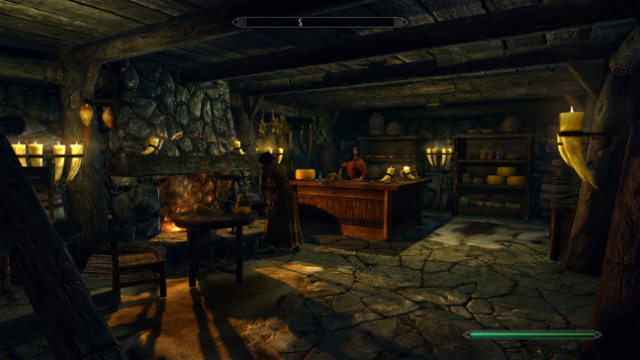 Whether you’ve stolen them or obtained them through more heroic methods, you’re going to need somewhere to flip your undesirables for some quick cash. Generally speaking, store owners in Skyrim are poor. Like dirt poor. Economic recession and all that, I suppose. But what this means is that you usually end up with far more crap than you can sell, eventually locking it all away in a seemingly abyssal cupboard in your house until you completely forget you spent two hours stubbornly over-encumbered in a dungeon because you didn’t want to let it go.

By increasing your Speech skill and purchasing the Investor perk, you can raise the amount of gold that all vendors have to barter with. Most of the time this puts them slightly over 1K, but the Riverwood Trader is different, for some reason. If you invest in the Riverwood shop (the first town you come to after the prologue, and the guy you had to get the Golden Claw for), he will generally have around 10,000 in his wallet, more or less. That makes unloading all the wooden spoons you’ve been collecting for the past 80 hours infinitely easier, and you can just wait 48 hours for his money to magically replenish and do it all over again.

The hard part is getting all your stored items to Riverwood, but if you were keeping them in Whiterun, you can just over-encumber yourself (I weighed 1,200 pounds the first time) and hop on your poor horse. Riverwood’s less than a five-minute gallop away, and you’ll be what my Saints Row character would consider “super baller status” in no time.

Houses are the most expensive things you’ll pay for in Skyrim, but they don’t have to be. By speaking to the Jarl’s Steward of one of the five major cities, you can purchase a home from him once you’ve requested to be a Thane (it all makes sense when you’re playing). If you agree to purchase the house, then quickly back out of the conversation and dump your gold in a nearby container (see video), you will still gain the keys to the property while retaining all your cheddar. This can also be done with decorations, which can be equally as costly.

Note that you must have the required amount of money to buy the house to do this trick, otherwise the necessary dialogue option will not be available to you.

Beneath the College of Winterhold lies a strange altar known as the Atronach Forge. Here you can summon various conjurations that will attack you, but it also serves a far more useful purpose. By placing a Sigil Stone (gained by completing a quest that Phinis Gestor gives you in the College once you reach level 90 in Conjuration) in the altar and then the required ingredients, you can turn any Ebony weapon or armor into its Daedric counterpart. Daedric equipment is the most powerful in the game for Heavy Armor users, and would normally require a Smithing skill of 90.

There was previously a glitch that allowed you to place the items in the altar and then quickly take them out while the Daedric item is being created, allowing you to keep both of them. This has been patched, but deleting the update from your hard drive may still allow you to do it.