You may have encountered more than a few odd references in Skyrim. I was on my way to go kill somebody (when am I not?) when I saw the ghost of a headless horseman riding along. I followed him but he just kept going, so I got bored and attacked a nearby camp of peaceful Khajit. It’s not me that’s like this, it’s my character.

Anyway, the developers of Skyrim have put in a nod to Minecraft and its creator, Notch, who they recently tried to sue for using the word “Scrolls.” Travel to the Throat of the World (the peak of the mountain where the Greybeard’s live). At the highest point (you’ll have to do a bit of jump-climbing), you’ll find a number of ore veins and a unique “Notched Pickaxe.”

This item can be disenchanted to learn the Notched Pickaxe Effect, which can then be applied to other items. If you dual-wield any two pickaxes and attack an ore vein, you’ll mine it much more quickly. Come get some, creeps!

Not particularly excited about that lockpicking mini-game? If you’re willing to put in the work, you’ll never break another lockpick again. Towards the end of the Thieves Guild questline, you’ll be given the Skeleton Key, which opens any lock in the game without fail. Sadly, you’ll have to relinquish this invaluable tool to complete the quest, so it’s kind of a trade-off.

Note that unlocking chests and doors with the Skeleton Key still increases your Lockpicking ability, so you could always come back later when you’ve maxed the skill out. 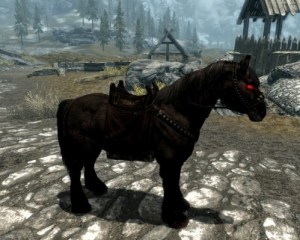 The first time I got a horse I was like, “Yay!” Then it went crazy and tried to attack a dragon. Three dead horses later, I decided I was just going to run everywhere. Fortunately, Shadowmere returns from The Elder Scrolls IV: Oblivion, and will make your life a bit easier if you absolutely must be accompanied by an equine accomplice.

To earn Shadowmere, join the Dark Brotherhood and you will be given him/her as a permanent pet early on in the storyline. Unlike other horses, Shadowmere is incredibly durable, not to mention slightly bad-ass. If Shadowmere does manage to die, it will respawn after several days, usually in the area where it previously expired.

Shadowmere can also be used as a pin cushion for your skill training. Thanks to its increased health and regeneration, you can stab, shoot, or burn it until you’ve leveled up your combat skill of choice. Better yet, guards won’t judge you like they will when you’re attacking non-demonic steeds. To make sure Shadowmere doesn’t go all dead on you, raise the difficulty and take a moment to catch your breath every once in a while before resuming the beatdown.

If you want to report any weird tips or glitches that you’ve discovered on your many adventures through Skyrim, please use the comments below. If you found this post helpful, check out our previous guide for even more goodies!