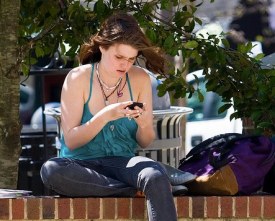 Forrester conducted an online survey with more than 37,000 respondents ages 18 to 88 in August 2011 and found that just two percent more of online adults have started using location-based applications since its 2010 report, but awareness of this class of applications grew by 14 percent during the same period.

The study was not limited to location-based social networks such as Foursquare, Loopt and SCVNGR (and formerly Gowalla), which are defined by their ability to allow users to share information about their whereabouts with their social graph. It looked at awareness, adoption and user demographics of the broader category of geolocation applications.

Forrester detailed its findings in a report entitled “Marketing Via Geosocial Apps: Why and How,” and offered suggestions for marketers looking to leverage location-based social networks. Marketers, according to the company, should specially target geosocial app users because they skew younger, are early adopters, and are twice as likely as the average adult to “share information about products they are considering purchasing or have purchased, or a product review.”

The findings are not surprising — Foursquare may have 15 million users, but the idea of explicitly sharing one’s location with social network friends is a foreign concept to most. And the data does leave room for what seems obvious: mobile devices are becoming inextricably intertwined with location services.

“All online adults are increasingly using location-based features on mobile devices, accessing the mobile Internet from many locations, looking for deals in exchange for brand interaction, and interested in what their friends are doing and what they think,” Forrester said. “We predict that location will no longer be a specialized service but, rather, embedded into all mobile activities, making location-based marketing a key tactic for marketing in the future.” 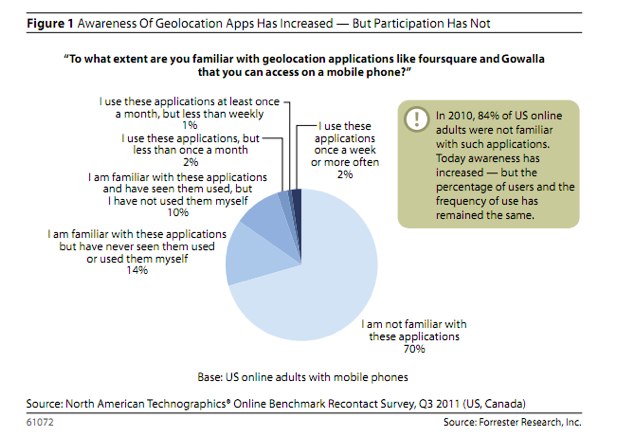 The chart depicts that five percent of online adults use geolocation apps in total, but Forrester told VentureBeat that the figure is actually closer to six percent (the lower figure is due to rounding of each category of response).