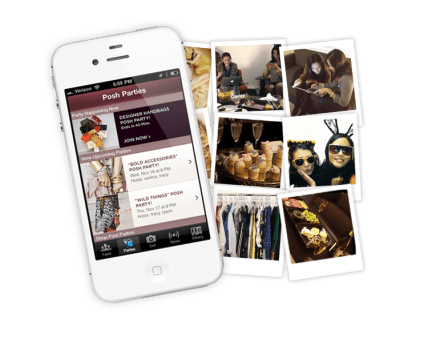 Any good spring cleaner enjoys weeding out a load of clothes, shoes and bags that still have life in them, but are just taking up closet space. Poshmark launched today with $3.5 million in funding to let anyone sell their old items.

Founder Manish Chandra, who also founded Kaboodle, explained that when he entered his closet, he saw bags of unopened items, barely used handbags and nice shoes collecting dust, and he realized closets all over the country probably look the same. For Chandra, however, eBay seemed too involved a process to list all of the items he wanted to sell. He created Poshmark, which allows anyone to list their items easily by taking a picture of the item,m uploading it directly into the app, choosing a list price and adding a title. Boom, you’re selling your clothes online.

“I look at this very similarly to what happened with Webex,” said Navin Chaddha, managing director at Mayfield Fund, in an interview with VentureBeat. “People used to travel to hold meetings, then webex came, people didn’t need to travel.”

What Chaddha is suggesting is that because mobile is so prevalent in our lives, we won’t need to use the computer, let alone hold in-person Tupperware or trunk shows to sell our things. Instead, we’ll just need a smartphone.

The Poshmark team built a new e-commerce environment from scratch, including its payments system. Once you’ve listed an item and an interested buyer purchases it, Poshmark will hold the payment itself. It then sends a shipping label to the item seller, who must print and ship the item accordingly. How to ship, what company to use, and other decisions are already made for the seller, which certainly takes some of the edge off getting your item to the buyer. One the item is received, Poshmark releases the payment to the seller and the transaction is completed. Poshmark uses Braintree to handle credit card payments.

The application is aimed at women, with words like “fashionistas” being throw around. All hail the dude who wants to join the app’s real draw: the “Posh Party.” Similar to companies such as Stella and Dot, which sell jewelry through individual entrepreneurs who put on home trunk shows, Poshmark has theme events such as Holiday Sparkle or Capes & Coats.

Items unsold during these parties become a sort of living collection, which people can shop until all the items have been snapped up. Otherwise, items are found through following other users who either list clothes and accessories they’d like to sell, or repost other people’s items for sale if they find them interesting. You can have discussions around an item as well, using the comments field. Like Twitter and Facebook, you can call out another user in the comments by using the “@” and then that person’s username.

“The power of that mobile phone and thinking how ubiquitous it is, it makes it possible for people to be disengaged and then engaged [with Postmark].” Chandra told us of how people are using the application.

According to Chandra, one woman made three sales while sitting in a bar in Atlanta. Another woman bought two items while taking a cab ride in New York City. This kind of behavior makes it possible for businesses to form.

“I think it’s very likely that women will start businesses,” said Chandra. “We want any woman to convert her closet into a live boutique.”