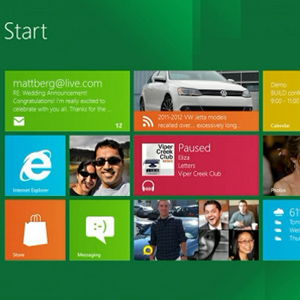 When Microsoft Windows 8 launches in 2012, it’s going after developers with one thing that truly matters to many of them: money.

The new operating system will feature the Windows Store to sell third-party apps. It’s a direct competitor to Apple’s App Store for OS X and iOS devices, the Android Market and numerous other app marketplaces.

Unlike most such marketplaces, which charge developers 30 percent of their sales, Microsoft will charge a lower, 20 percent rate on sales over $25,000.

“We want to return the most money we can into the hands of developers, and we want to provide the best economics of any platform,” said Microsoft corporate vice president Antoine Leblond. Speaking at an event in San Francisco tonight he said, “It’s the most significant developer opportunity ever.”

The Microsoft event was the first time financial terms for developers have been discussed. Developers whose apps make more than $25,000 will receive 80 percent of revenue generated, as opposed to the industry standard 70 percent. If an app sells less than that amount, the developer will only get 70 percent.

While Apple has a significant headstart in the mobile apps marketplace, Microsoft is also hoping to lure developers with the enormous reach of its current desktop operating system. Windows 7 licenses are on 500 million devices worldwide, Microsoft said.

Microsoft also announced today that developers can begin submitting their apps to its Build Windows Contest, which opened today as well.

Windows 8 will be available for public beta testing starting in late February, 2012.

Check out a video preview of the Windows 8 store.