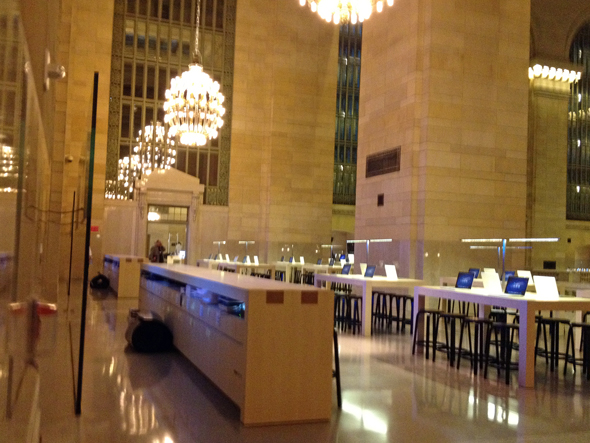 This isn’t just another Apple Store opening; it’s a big deal for a few reasons. First, Grand Central is iconic and featured frequently in New-York-based movies and television. Second, at 23,000 square feet, this location will be one of the world’s largest Apple Stores. Third, the location will have a different look than most other Apple Stores because of its surroundings.

The store takes over the spot the Metrazur Restaurant held in Grand Central, and Apple reportedly paid $5 million to get the spot. The massive store will offer two Genius Bars with 12 seats each, 45 display tables for Apple products, three walls of accessories and 315 full- and part-time employees. Unfortunately, there will be no public restrooms like most other Apple Stores have.

Business Insider has posted a few photos outside and one shot inside of the store (including the one above). It looks like a place tourists will go when checking out Grand Central.

The Grand Central location’s hours will pair nicely with that of commuters using Grand Central to travel all over New York and surrounding states. It will be open from 7 a.m. to 9 p.m. Monday through Friday, Saturday from 10 a.m. to 7 p.m., and Sunday from 11 a.m. to 6 p.m.

Watch out later this week for a full gallery of shots from inside the store.