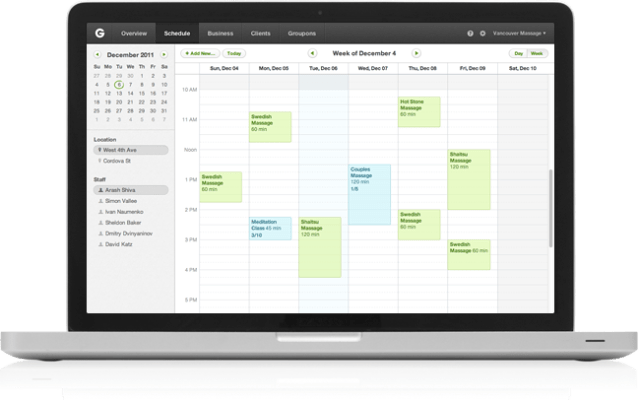 Talking on the phone is so 2009, but every so often you must power through the pain, pick up the phone and schedule an appointment. And so, newly public Groupon is piloting an online scheduling tool to take the pain away for merchants and their customers.

Groupon Scheduler, as the new tool is called, gives merchants in Sacramento and Miami the ability to accept appointments on the web, so that phone-phobic patrons can skip the hassle of talking to a person and immediately book a date after buying a deal.

Both merchant and customer receive confirmation emails when an appointment is booked via Scheduler, and automated email reminders are sent out 24 hours before scheduled bookings.

The product is currently free for merchants, and integrated into the Groupon experience, but merchants can also optionally use the scheduling tool and “Book Now” buttons to manage their entire calendar, and all of their services (not just the services they’re offering via Groupon), on their own sites.

“We wanted to create a tool that would not only make the Groupon feature process easier for merchants, but also help them run their businesses on an ongoing basis beyond their Groupon deal,” Mihir Shah, vice president of product, said.

Groupon Scheduler actually comes from a small, Vancouver-based company called OpenCal. Groupon acquired the startup in September for an undisclosed sum and waited until yesterday to announce its new purchase.

The new feature certainly fills a small hole in the Groupon experience, but with limited availability, Scheduler will do little to boost Groupon sales or calm investor trepidation. Or maybe it will. The market is showing renewed faith in the company. Groupon opened at $20 a share in November, saw share prices plummet shortly thereafter, but is once again trading slightly above its initial asking price.