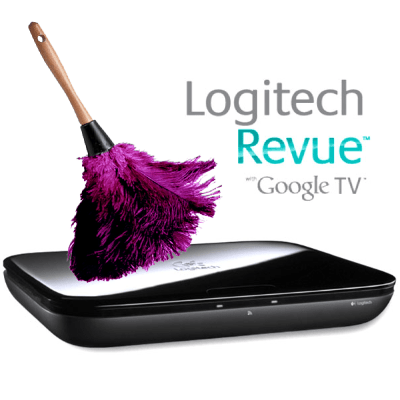 For those of you letting your Logitech Revue collect dust on a neglected shelf next to the DVD player, it’s time to break out the feather duster.

The Logitech Revue, a Google TV-enabled set-top box, is getting updated with Android 3.1 Honeycomb, the company announced today.

The new update gives Revue owners access to a new Google TV user interface, the Android Market, improved content search functionality and better overall performance. The addition of the Android Market is perhaps the most notable addition because it lets people download hundreds of Android applications on their HDTVs, including the recently launched Google Music app and Netflix. Over 50 apps are optimized specifically for the Google TV experience.

The update is free and will be delivered automatically to Revue owners via high-speed internet connection when they turn the device on. The update should roll out to all Revue owners by the end of the week, according to Logitech.

The Honeycomb update is probably the last significant upgrade planned by Logitech. Despite being the best Google TV-enabled device on market, the company announced plans to discontinue the Revue once the current stock sells through. Both critics and Logitech’s CEO have said the previous version of Google TV wasn’t ready for public consumption, which contributed to a slow consumer adoption rate and dismal Revue sales. The company dropped the price of the Revue from its initial $299 price point to just $99.

With the Honeycomb update (as well as comparable pricing with Apple’s severely limited $99 Apple TV set-top box competitor), many think the Revue is a great bargain for anyone looking for a Google TV solution.