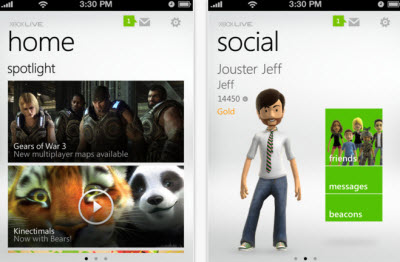 The free app will allow users to log into their Xbox Live accounts and see their avatars, gamerscores, communicate with friends, and other functions even if they’re far from their Xbox 360 game console.

The app is part of making Xbox Live into a broader entertainment network that is indispensable to people, whether they are playing games or not.

The new app lets you read and send messages to friends, manage your friends list, invite new friends, read and edit a full Live profile, change your avatar features, and view and compare your achievement progress with friends. In other words, it’s just one more way to brag about your game abilities, according to Larry Hyrb, aka Major Nelson, Microsoft’s official game podcaster.

Microsoft launched similar functionality when it launched Windows Phone 7 software a year ago. But making the app available on the iPhone means that Microsoft is no longer religiously promoting its own Windows software. Yesterday, Microsoft introduced its Xbox Companion for Windows Phone 7, which has even more features than the iOS app. You can, for instance, use the Windows Phone 7 app to control your game console and what is displayed on it.