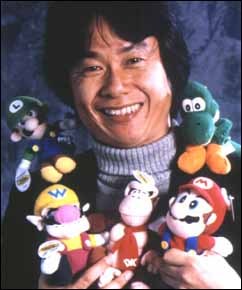 [Update: Nintendo is disputing the Wired report, saying in a statement that “”Video game designer Shigeru Miyamoto’s role at Nintendo is not changing” and that “he will continue to be a driving force in Nintendo’s development efforts.”

The statement goes on the clarify that Miyamoto’s expressed desire to pursue more hands-on development is “inclusive of overseeing all video game development and ensuring the quality of all products.”]

Legendary Nintendo game designer Shigeru Miyamoto said he will be stepping down from his supervisory executive role at  the company in order to focus on smaller, more personal game projects and allow room for younger designers to advance.

In an interview with Wired.com, the 59-year-old creator of venerable Nintendo franchises including Mario, Zelda, and Star Fox, said he was ceding his supervision of Nintendo’s Entertainment Analysis and Development branch, but would not be leaving Nintendo or quitting game development as a whole.

“What I really want to do is be in the forefront of game development once again myself,” he said. “Probably working on a smaller project with even younger developers. Or I might be interested in making something that I can make myself, by myself. Something really small.”

By “really small,” Miyamoto said he meant a project that could be both started and publicly shown next year, something that wouldn’t “require a five-year development time” he said.

Miyamoto has been with Nintendo since 1979, when he helped design little-remembered arcade game Sherriff, the start of a career in which he was involved in some way with almost all of Nintendo’s most successful releases. His direct impact on any particular Nintendo game has dwindled somewhat as he’s moved into an executive role at the company,  though, spreading his work across high-level supervision of many teams working on high profile releases, including the recent Super Mario 3D Land and The Legend of Zelda: Skyward Sword.

Still, Miyamoto’s inspiration and guidance for the company are important enough that Nintendo president Satoru Iwata has said he’s barred Miyamoto from public discussion of his personal hobbies, for fear rival companies will cotton on to his next inspiration.

Speaking to Wired, Miyamoto stressed his stepping aside was the only way the young developers underneath him would be able to mature into the Nintendo leaders of tomorrow.

“Unless I say that I’m retiring, I cannot nurture the young developers,” he said. “After all, if I’m there in my position as it is, then there’s always kind of a relationship. And the young guys are always kind of in a situation where they have to listen to my ideas. But I need some people who are growing up much more than today.”