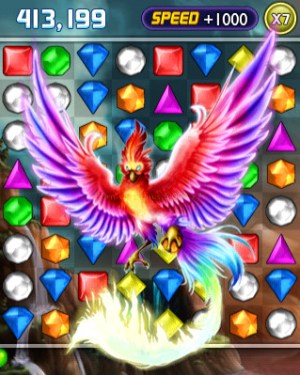 It shows that, while under the new ownership of Electronic Arts, PopCap is adjusting to the changing popularity of business models. More games are moving toward free-to-play, where users play for free and pay real money in small amounts for virtual goods.

The two games were previously offered as different modes in a unified “Bejeweled 2 + Blitz” download on Apple’s iOS app Store, which was usually sold for 99 cents. The separation, being rolled out today, brings Blitz’s mobile business model more in line with the free-to-play Facebook version, which makes money by selling optional in-game “boost” items to over 2.5 million daily players blitzing through the game’s trademark 60 second bursts.

The mobile version of Blitz, PopCap’s first mobile freemium title, uses Facebook Connect to let players compare scores with friends, and offers a new interface and tutorial system over the previous mobile offering. EA offered a similar split strategy last week with The Sims. The Sims 3 will remain a premium purchase game, while EA will launch The Sims FreePlay with a free-to-play model.

Meanwhile, PopCap will be retiring the best-selling iOS version of Bejeweled 2 in favor of a new version, selling for 99 cents, that includes improved graphics, game modes and achievements.

PopCap says it has sold 40 million copies of the Bejeweled franchise on mobile platforms, putting it second only to the mobile version of Tetris, which is also controlled by PopCap parent EA.