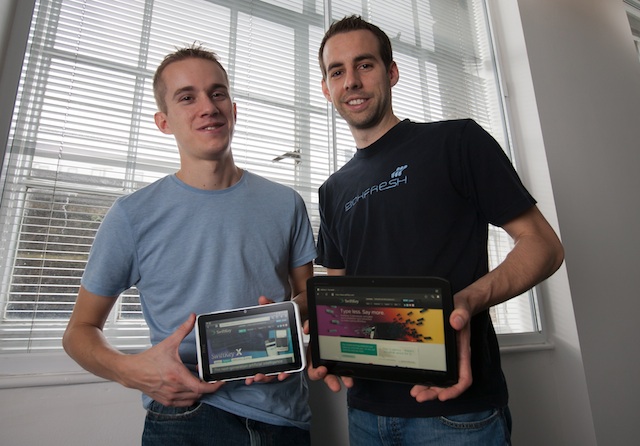 TouchType Ltd., which makes a clever keyboard app for Android phones, is on the verge of expansion.

The London-based company raised a $2.4 million round of funding led by Octopus Investments, it announced today.

TouchType’s app, SwiftKey X, replaces the default on-screen keyboard with a customized one that has better predictive capabilities about what you’re going to type next.

The underlying technology, which the company calls Fluency, is based on linguistic analysis of millions of web pages to provide more accurate and longer-range predictions than most software keyboards, and it’s this technology that the company is staking its future growth on.

“It’s not an app business, fundamentally it’s a language technology business,” says cofounder and chief technical officer Ben Medlock, in an interview with VentureBeat. “We wanted to approach this as a generic problem: How do we model the way people transfer their thoughts into their mobile devices? So we built the engine around that concept … so whatever platform you’re talking about, it’s fundamentally the same problem.”

As an Android app, it’s uncannily accurate, which has recently helped push it into the number one spot among paid apps in the Android Market. For instance, if you type “a” it might auto-suggest the word “are.” Select “are” and it will suggest “you,” followed by “looking,” then “for.” Pretty soon, you’ve typed an entire sentence with only a few keystrokes and your Twitter followers all know exactly what you’re looking for. (Hopefully the sentence is what you meant to say — but if you are excessively reliant on autocomplete, the onus is on you, not SwiftKey.) The company says its app has saved its customers more than 20 billion keystrokes to date.

“Android has been an incredible distribution network,” said co-founder and chief executive Jon Reynolds, because of the large number of consumer devices running the OS and also because almost every major phone manufacturer is now making Android devices.

SwiftKey also optionally analyzes your own linguistic tics, by looking at your emails and Twitter updates, to hone its predictions just for you.

The company plans on using the funds to continue enhancing the core linguistic technology, adapting it to new languages and perhaps job-specific functions (a version for doctors, another one for lawyers, perhaps). It also hopes to license this technology to the makers of phones and mobile operating systems. While only Android allows customers to replace the default keyboard by installing an app, other manufacturers might be interested in integrating the core TouchType technology into their products. TouchType also plans to expand its presence in the U.S. and Asia, a move that ought to help it forge relationships with potential OS companies and manufacturers.

TouchType has about 30 employees and has been generating revenue from sales of its apps since 2010. This is the company’s first institutional round, following a seed round of about $1.2 million in August, 2010.