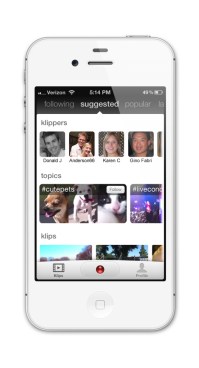 More than 115 million smartphones were sold during Q3 of 2011, according to the latest Gartner report, and almost all of them have some video capability. But with the spike in video creation comes a new problem: what to watch. Startup Klip tackles this problem by making it easy to track and sort videos from your friends on your iPhone.

Klip is a video sharing app that helps you sift through all that video to share and discover the best content with your friends. Today a new, more social version of Klip is available in the iTunes App Store, Klip 2.0.

The enhanced version of Klip has a refreshed layout with social networking at its heart. You can search for videos from your friends as always, but Klip now features a recommendations tab, and deeper Facebook integration.  Now it’s easier to see videos people outside your circle based on your interests.

“We’re bringing to bear a lot of technologies that are not viewed by our users as technologies, but as a way to interact with videos,” Klip co-founder and chief executive officer Alain Rossmann told VentureBeat.

Klip has 20 employees and raised an $8 million Series B round in mid-November just two months after launching. Klip raised $2 million in a previous round of financing. Benchmark Capital, Matrix Partners and Alain Rossmann have all invested in the company.

It competes with a number of social video sharing apps, such as Looplr and Vlix, an app which allows users to shoot videos and add effects. Klip and services like it succeed because they are built on top of social networking behavior that has become commonplace online. On Facebook we tag our friends in important posts, and they’re notified the next time they log in to the service. On Twitter we’re able to follow trending topics by searching for hash tags that describe events, people, places or ideas. Klip has integrated both of these features with its service so that video clips follow the same type of conversational flow as established social networking behaviors.

Social video sharing is also breaking down the barriers between amateurs and professional broadcasters. Today’s smartphones  allowing citizen journalists to compete with major news organizations to break important events to the public. The iPhone 4S can record in 1080p HD, and the pocket-sized device is quickly eroding the picture quality of professional video equipment. And through our social networks we have a distribution channel that used to be controlled by major media outlets. So while we may use phones to record great skateboarding tricks, we have the power to use them to capture a protest movement in progress and share it with the world.

Even moviemakers are starting to use cellphone video. Olive may be the first feature-length movie shot entirely on a phone to be released in theaters. The cinematographers used a Nokia N8 mounted on a specially designed 35-mm lens for filming, and they’re hoping to raise $300,000 through Kickstarter to get the picture in theaters. But while there’s a certain notoriety that comes with screening a movie before a theatrical audience, it’s now possible to have many more people see your work through their social networks.

Could the time come where we see a full-length film shot entirely using Klip?