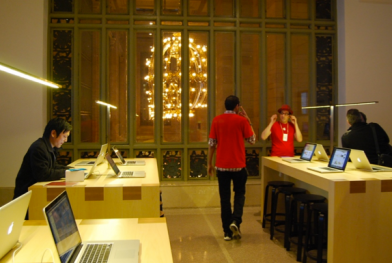 Since Apple lost its head of retail, Ron Johnson to department store JCPenney, the company has been on a search for a replacements. In the meantime, someone needs to be at the retail beast’s helm, and that’s chief financial officer Peter Oppenheimer.

Johnson left Apple for JCPenney in November after being hired by the company in June. Finding a replacement is important, as Apple’s retail division is largely successful and a huge part of Apple’s outward brand. However, Johnson seemingly put the ball in motion for Apple’s retail plans. It doesn’t seem to have stopped the company as it opened its latest retail store in New York City’s famous Grand Central Terminal today. Indeed, this retail store is one of the largest for Apple, sitting at 23,000 square feet.

Apple is currently using Egon Zehnder International’s services to find a replacement for Johnson, according to 9-to-5-Mac. The company has also denied promoting Steve Cano, a key player in Apple’s retail division, to senior vice president of retail.

Instead, Oppenheimer is taking charge, outside of his usual financial responsibilities. He will lead Steve Cano, Jerry McDougall and Bob Bridger and is only a temporary choice until Apple finds a permanent filler. His title also remains the same, and reports to Tim Cook.