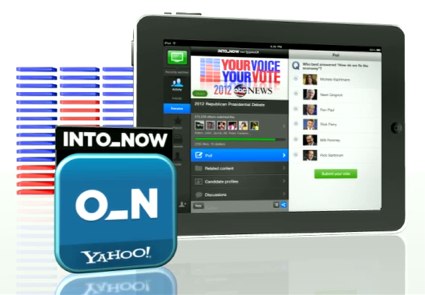 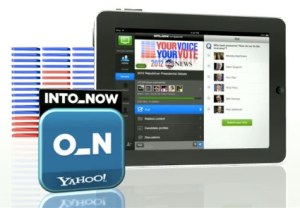 Republican presidential hopefuls will square off Saturday night at Drake University in Des Moines, Iowa. Conversations about the debate are sure to trickle over onto the social web, and ABC News, which is broadcasting and moderating the event, will gauge viewer reactions in real-time by polling them via TV-tagging application IntoNow.

“It’s an exciting opportunity to bring the ability to engage a widespread audience leading up to the presidential [elections],” IntoNow co-founder and Yahoo product manager Adam Cahan told VentureBeat. “This is the first multi-screen debate experience spanning TV, web and mobile devices with the ability to inform, interact and engage audiences.”

IntoNow, a social TV application for iPhone, Android and now iPad, was acquired by Yahoo in April 2011. The application uses patented technology to listen to and “tag” — a.k.a. identity — millions of television and movie titles.

Debate viewers who use the app to tag the ABC News broadcast will be presented with poll questions, related news content, candidate profiles and discussion streams all tailored around the event. ABC News will use the application’s poll feature to query live audiences and gauge reactions to candidates’ debate responses, and then use the collected data to pose follow-up questions.

So you may hear an ABC News moderator say something like, “Candidate X, our live data suggests only 33 percent of Americans agree with your stance on X…,” we’re told.

The news network has been aggressively promoting IntoNow on the air (Yahoo is a sponsor of the event), includeding a prominent mention on flagship show Good Morning America. It will continue to promote the app and its poll questions during the live broadcast.

The Republican debate airs Saturday at 9 p.m. ET on ABC and will be streamed online. 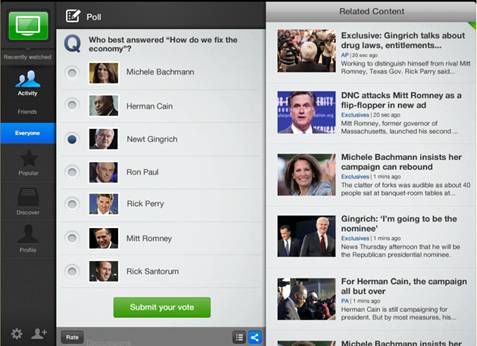