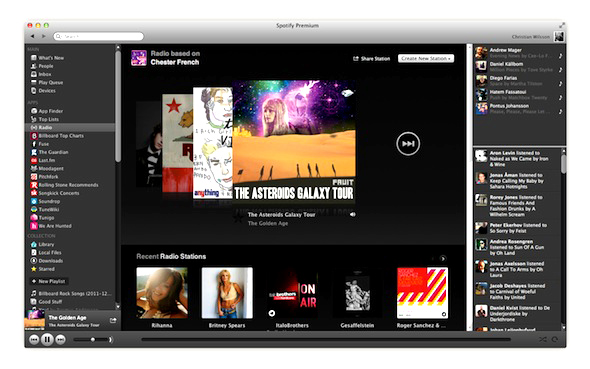 One of the features popular music service Spotify has lacked most has been radio. No longer. The service has just added a new Spotify Radio function with an unlimited stations and skips.

Spotify has been on a roll with news lately and just a week ago it opened an API so HTML5 apps can be built by third-party developers that can take advantage of Spotify’s features. On top of this, Spotify made headlines in October for forcing users to login with Facebook and for the launches of its BlackBerry and Windows Phone 7 apps.

The new Spotify Radio, which looks much-improved all around, will be rolling out in the next few days to all of Spotify’s users. The company will now have a better footing to compete with the likes of Rdio and MOG when it comes to music discovery. Spotify describes the changes to its radio feature as such:

• Unlimited stations: Choose a track, artist or genre and Spotify will instantly create a station of similar music. Your station will keep playing music based on your initial choice. Plus there’s no limit to the number of stations you can create.
• Unlimited skips: Don’t like a track? Skip it. As many times as you like.
• All-new intelligent recommendation engine: Spotify has put some clever new kit under the hood of Spotify Radio to let users access a better music discovery service.
• Unlimited access: With over 15m tracks to choose from, you’ve never had a bigger song library to enjoy.
• Available to all: Spotify Radio will be available to everyone – both free users and subscribers.

Spotify has seen considerable growth in its revenue and number of paid subscribers since its launch in the U.S. in July. As of October, the service has more than five million active users, with two million paying subscribers. Spotify has raised about $120 million in funding so far and is valued around $1 billion. It raised a round of financing earlier this year from Russia’s DST, the investment company that has previously backed Facebook, Groupon and Zynga.