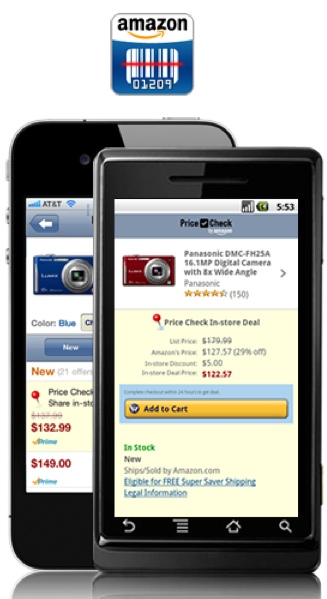 Amazon kicked up a stink yesterday, after it announced a special offer to save $15 today (Saturday) when customers using its price-comparison feature to check out prices at offline merchants.

The offer, valid for today, and still announced on Amazon’s Price Check app page, lets you get a 5 percent discount (up to $5 on select items in electronics, toys, sports, music and DVDs), on up to three times. You just check prices on any item with a “deal” button on it

The irony is that most Americans probably wouldn’t have found out about the deal, were it not for the huge amount of publicity generated by groups opposed to it. Check Google News for Amazon Price Check right now, and it’s almost impossible to find Amazon’s original announcement about the deal. But you’ll find more than 200 articles by publications about the furor it has created among groups deriding the app, and calling it “evil.”

Another great example of the “Streisand effect.”

Retail trade groups say the app is unfair because it encourages consumers to buy products online even though they may have found the products while shopping at a bricks-and-motor store.

The fight comes also as major retailers — both online and offline — are divided over a proposed piece of legislation that seeks to clarify the murky issue of charging sales tax for purchases made on the web.

Several states only require customers to pay a sales tax on purchases made online if the online retailer has a physical retail store address within the state. But retailers that operate entirely online, like Amazon, only have shipping and service centers, not actual stores, which has allowed the company to evade charging its customers a local sales tax in some cases. This gives online retailers an advantage over direct competitors that operate both on the web and through physical stores — meaning customers get a better deal when shopping online. It also means state governments miss out on billions of dollars in tax revenue.

The newly proposed bill, called The Marketplace Fairness Act, was introduced last month by U.S. Senators Lamar Alexander (R-Tenn.), Dick Durbin (D-Ill.) and Michael Enzi (R-Wyo.). If passed, the new law would give state governments two ways to collect sales taxes from online purchases. The first way requires U.S. states to sign a multi-state legal agreement that would bring each of their sales tax codes into conformity. The states can then compel online retailers to charge or remit a sales tax. States that don’t sign the legal agreement can still force online retailers to collect sales tax on purchased goods if they adopt some minimum standards to simplify their collection process.

Amazon has come out in support of the Marketplace Fairness Act, which is likely because the company has already successfully negotiated deals with some states that allows them to continue not charging sales tax (despite operating a shipping or service center within the state). However, eBay is against it.

Just yesterday, we reported on a study by Forrester that suggested that taxing online purchases would do little, if anything, in changing consumer behaviors, and would not return shoppers to main street. It also said that less than 10 percent of shopping is done online.