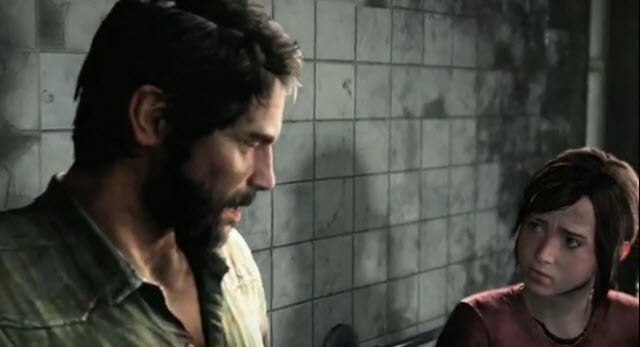 The Last of Us is a new title coming from Sony. It’s a futuristic title about a post zombie-apocalypse. The title is the first title unveiled at the VGA awards tonight.

The trailer shows a father and his daughter fighting it out with a thug and then battling some fast-moving monsters. The girl pictured right narrates the clip and talks about how such fighting is a way of life to them.

“This is our routine, day and night,” she said. “All we do is survive.”

It’s rare to see truly original titles, so it’s good that Sony’s two thousand or so game developers are busy producing original PlayStation 3 games such as this one. And it seems that it is another solid movie-like production, driven by character development and emotion.

It’s not a surprise that The Last of Us is being developed by Naughty Dog, the creators of the character- and emotion-driven Uncharted series. The game blends survival and action to tell a character-driven story about a population decimated by a modern plague. Abandoned cities are being reclaimed by nature and the remaining survivors are killing each other for food, weapons and anything else. The main characters are Joe and Ellie.

Evan Wells, co-president of Naughty Dog, said the team has been working on the title for some time and hopes it will be a step forward in cinematic gaming and storytelling. Developers include game director Bruce Straley and creative director Neil Druckmann. The Uncharted series has sold more than 13 million copies to date.

The trailer says the game is captured directly from a PS 3 system. The beginning looks beautiful, with leaves blowing in the sunlight and curtains blowing in a window. But it soon gives way to a shot of a body dripping blood on a floor and a teenage girl discovering a brutal fight to the death. They search a body and then find that some human-like monsters are coming in to eat the body and then them.

“He tells me about how these streets used to be crowded with people, going about their lives,” Ellie says in closing. “Must have been nice.”