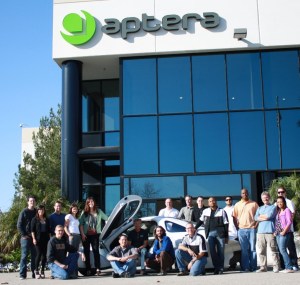 It’s not the best photo, but it means a lot to the 19 people in it.

Posed in front of a mirrored glass office building under a colorful logo, they are the final employees of the now-defunct electric-car startup Aptera Motors on the last day of its existence, Friday, December 2, 2011.

If there’s one lesson to be learned from the closing of Aptera, it may be this: Starting a car company takes a huge amount of money — orders of magnitude more than the software startups Silicon Valley venture capitalists like to fund.

And if the cash runs out at any point, the company will die.

Over the last week, we interviewed former CEO Paul Wilbur and former marketing VP Marques McCammon, who were there to the very end. We also spoke at length with company founder Steve Fambro, who resigned his seat on the Aptera board of directors early this year. He had been replaced by Wilbur as CEO in September 2008. From those interviews and other research, we’ve compiled this inside chronology of the events that led to the end of Aptera.

Not just a single car 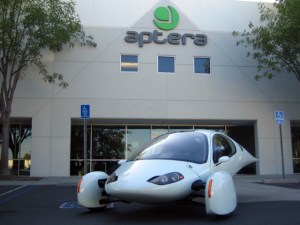 Through several hours of conversations, a few themes emerged from the Aptera story as recounted by Wilbur and McCammon.

The pair speak highly of the entire workforce, all of them now looking for jobs.

It is clear that the car designed by founders Fambro and Wilbur was not the car Aptera ended up developing. In fact, it created a longer, larger version of the Aptera 2e three-wheeler to comply with the 738 separate Federal Motor Vehicle Safety Standards covering cars that may legally be sold.

After it became clear that funding a three-wheeler wasn’t going to be possible, the company switched gears in January and threw all its design resources into creating the 4e, a four-seat, four-wheeled car using the same plastic composite body shell construction as the original three-wheelers.

Both Wilbur and McCammon believe the company came very close to surviving — and suggest that years of discussions with the Department of Energy over its advanced technology vehicle manufacturing (ATVM) loan program ultimately took too long, dooming Aptera to run out of cash.

That $25 billion DoE program offered low-interest loans to automakers and parts companies that would use the money to retool existing plants to build advanced-technology vehicles with fuel efficiency at least 25 percent higher than vehicles they replaced.

Here’s the chronology of the startup:

So if you believe Wilbur, Aptera simply ran out of time amidst a loss of confidence by its investors. 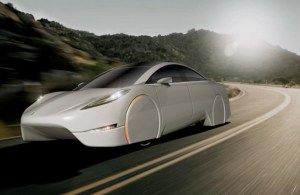 Surely the political controversy around half a billion dollars of DoE loans to failed solar-panel maker Solyndra didn’t help. There was also a small kerfuffle over the low 20-mpg EPA gas-mileage rating for the 2012 Fisker Karma range-extended electric luxury sport sedan, now finally on the market–and partly funded with DoE loans.

With a presidential election year coming up, Wilbur says, “the [ATVM] program could go away completely.” No big-name investor stepped up to carry Aptera, in the way that Next Autoworks had famed Silicon Valley venture capital firm Kleiner Perkins to lead its funding.

So, Wilbur says, “We wanted to do the right thing for our employees,” closing the company while there was still enough cash to pay them a small amount of severance.

In the end, Wilbur says, if he had it to do over again, he would avoid what he termed the “bright shiny object disease” of DoE loans. He spent three of his three and a half years at the company pursuing Energy Department loan funding, logging time in Washington, D.C., in endless meetings with government officials and lobbyists.

Because Tesla and Fisker got loans, “we listened to that too much,” Wilbur admits. “We should have raised the money ourselves rather than relying on the DoE.” 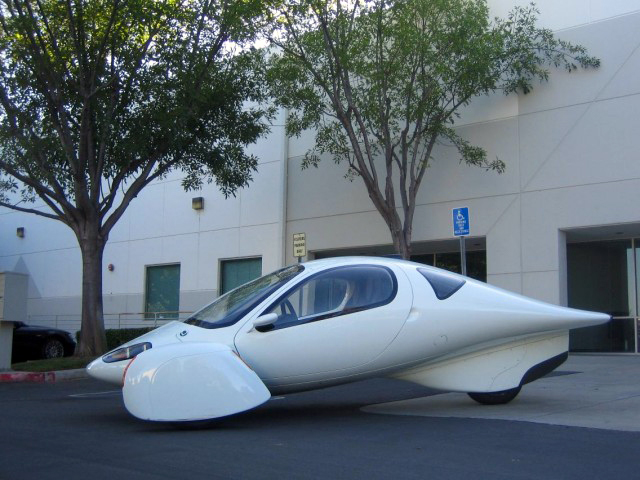 There’s a broader question, of course: Was a three-wheeled two-seater that looked like a Cessna cabin on wheels ever going to sell the 20,000 per year that its executives touted?

All three men pointed to the 5,000 Californians who placed a deposit of $500 to get on the list for an Aptera 2e when the car went into production.

Conversion rates are notoriously tricky to estimate (they’re always less than 100 percent, but by how much?). Whether more than a few thousand souls would be brave enough to drive such a radical device will likely never now be answered. 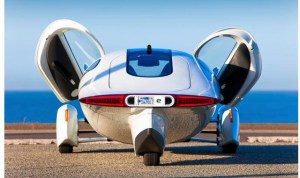 And clearly the vision for a three-wheeled electric motorcycle that Fambro discusses at length in last week’s Transport Evolved interview was not shared by the executive team brought in during late 2008.

The car that those 5,000 investors put down deposits for was Fambro’s concept, although he does not feel that the final design–two years ago, it was leaked on the day we drove an earlier 2e prototype–stayed true to his original vision.

Nonetheless, the ATVM program is one that’s meant to allow companies to bootstrap technology to get more efficient vehicles into the hands of many, many drivers more quickly.

That’s why Ford has been the single largest recipient of loans thus far, getting a whopping $5.9 billion to roll out its EcoBoost line of smaller, more efficient gasoline engines across its entire model range–as it’s now doing.

Lingering questions about the collapse: 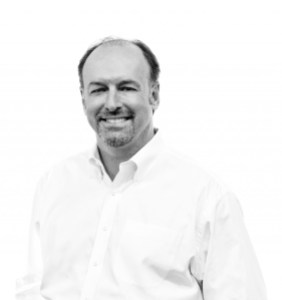 Many more questions remain about Aptera’s collapse, and they’ll no doubt be endlessly debated. We have partial answers to a few.

Does the DoE Conditional Letter of Commitment really exist?  Both Wilbur and McCammon assert–emphatically, even angrily–that it does. McCammon provided to GreenCarReports a scan of a cover sheet for such a document, dated September 13, 2011. GreenCarReports has not, however, seen the actual letter, which McCammon offered to show to a reporter in person.

He also provided a heavily redacted e-mail–which he stated was from a DoE official, although it cannot be confirmed from the scan–that refers to “a letter…addressing the status of Aptera’s application,” and is dated October 19, 2011.

Presuming that the DoE did issue a conditional commitment letter–it has refused to comment on Aptera–it’s worth noting that Aptera executives claim it required the company to raise $80 million of matching funds to obtain the DoE low-interest loans. And its executives were unable to do that.

What happened to all the deposits?  Wilbur claims the majority of the deposits have been returned–starting last August–though “they’re having a hard time finding” some depositors. On the other hand, at least one GreenCarReports commenter has yet to receive a deposit back and is not having calls or e-mails returned by either the company or its liquidators.

Did Aptera take 2e deposits even after it knew it was dropping development of the car?  Wilbur says that although the website didn’t drop its offer to take deposits until June, the company disabled the back end in January so no deposits could actually be accepted. If any potential Aptera buyers were able to put down a deposit on a 2e after January, that would contradict the ex-CEO’s claim.

This article by John Voelcker originally appeared on GreenCarReports.com, one of VentureBeat’s editorial partners.