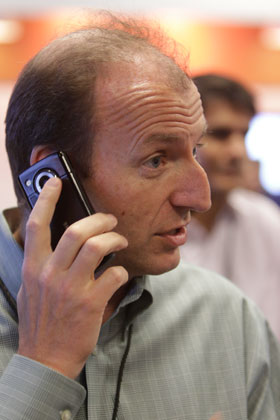 Andy Lees, president of Microsoft’s Windows Phone division for the past three years, is getting a new role within the software giant at CEO Steve Ballmer’s request.

Strangely, Lees is holding on to his president title for now, even though his new duties also involve working on a Windows 8 project. Lees (pictured) is being replaced by Terry Myerson, a Microsoft VP who has spearheaded engineering for Windows Phone, reports AllThingsD.

“I have asked Andy Lees to move to a new role working for me on a time-critical opportunity focused on driving maximum impact in 2012 with Windows Phone and Windows 8,” Ballmer said in an internal memo distributed to Microsoft employees last night. “We have tremendous potential with Windows Phone and Windows 8, and this move sets us up to really deliver against that potential.”

It’s unclear what exactly Lees will be working on, though from Ballmer’s mysterious description I imagine it has something to do with Windows 8 tablets. The project may also be a useful pretense to transition someone else into managing Windows Phone — which has been well reviewed, but hasn’t really made a dent in sales against the iPhone and onslaught of Android devices.

For Windows Phone, this next year is all about Microsoft’s contentious partnership with Nokia. Much of Windows Phone’s future depends on the success of Nokia’s Lumia 800, and to a lesser-extent, the lower-end Lumia 710. As AllThingsD points out, Myerson is familiar with his Nokia counterparts, which could be crucial to managing the Windows Phone platform for the next few years.