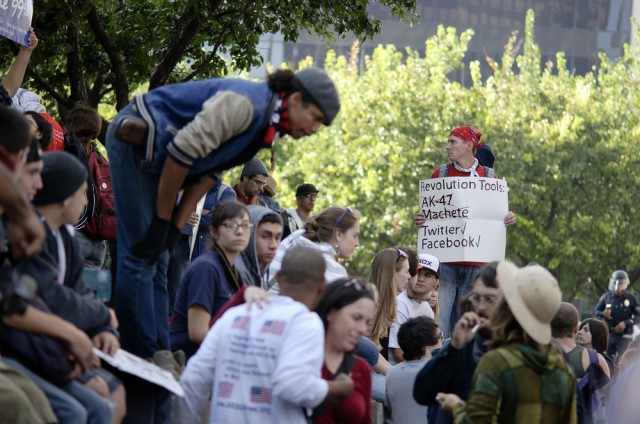 Technology was once a luxury. Today, technology is a part of everyday life, and indeed it even touches the 99 percent. Protesters are now both live streaming events and using Skype as a megaphone, sometimes literally.

According to The New York Times, live streaming website Ustream has over 700 channels dedicated to the Occupy movement. The point of live streaming is to bring people from anywhere to your event, so they can be involved even if they can’t physically travel there. Occupiers are using the live stream for exactly that, streaming general assemblies, marches, speeches and other pivotal moments of the protest as a means to connect.

This is one of technology’s main roles in a protest such as this one. Occupiers have been accused of having a disjointed message, and no core leaders. Some call the Occupy movement Occupy Anywhere given the mass scale of Occupy camps around the world. There’s Occupy Wall Street, Occupy Oakland, Occupy Denver, Occupy San Francisco even Occupy individual schools, and maybe hundreds more. Given how spread out so many of these protesters are, technology and social media must be used to connect the message.

Live streaming has played an important role showing how “on the go” these camps are. Many of them are being torn down, and thus Internet access isn’t guaranteed. Ustream has seen roughly 70 percent of Occupy live streams come from mobile phones, with 89 percent being viewed on mobile phones. In order to really take part in these, however, you need a smartphone, which many still do call a luxury. Walking through an Occupy camp, you’re sure to see a few iPhones and Androids, but not enough for everyone to whip out a device and stream their thoughts. 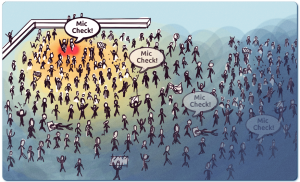 That’s where The People’s Skype comes in, taking communication to a personal level. The People’s Skype was created by Jonathan Baldwin to aid in “mic check.” Mic check is when the occupiers come together and listen to people with an inspiring message or important news, otherwise known as a General Assembly. The tent cities, as Occupy camps have come to be called, can be very large, with several thousand gathering at the biggest camps. In order to make sure voices are heard, Occupiers use “The People’s Mic,” where one person yells out a sentence, and others repeat the sentence in concentric circles out to the back of the crowd. Kind of like a loud game of telephone. 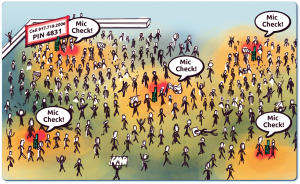 The People’s Skype tries to put speed and clarity in this process by having anyone with a mobile device – smart and feature phone agnostic – call into a line connected through a Tropo application programming interface (API). The crowd is, in essence, on a one-way conference call. People in the area can gather around a phone and listen in individual groups, or perform the out loud repetition depending on the size of the crowd. Conference holders can post polls through Skype, which users can participate in by entering a passcode and a 1 or 2 for yes and no responses.

It’s a pretty simple solution to an otherwise inefficient way of communicating. The program itself, however, was built on PHP with MongoDB used as a database and lastly the Tropo API. This isn’t the first “hack” we’ve seen for the Occupy movement either. In October, Matt Ewing, founder of green tech company Rewire Labs, created Occupy the Web, where developers came together for a 24 hour hackathon. Communication was also a theme here, acknowledging the need to connect Occupiers of all walks of technology savvy.

Check out how The People’s Skype works in the video below.