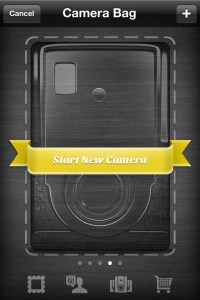 Back in my day, we had to fill a roll of film with 24 photos, drop it off at the Fotomat, and then wait an hour (or a day!) to see the final printed product. The makers of retrotastic photo app Hipstamatic have deeply romanticized memories of those analog times. They pine for the suspense, the unpredictability and the photo-foreplay, if you will, of film.

Synthetic, the company behind Hipstamatic, announced its latest app today, which combines the disposable cameras of yore with the Hipstamatic aesthetic. The free D-Series iOS app (“D” is for disposable) requires you to shoot 24 photos before you can see what the images look like. You can invite other people who have the app to share a “camera” with you, and each photo a member of the group takes counts as one of the 24. Once that final photo is snapped, everyone gets a push notification and the roll is downloaded to their iPhone or iPod touch.

Synthetic hit it big two years ago with the 99-cent retro-filter photo app Hipstamatic, which in the film spirit, makes you pick a filter before taking a photo. Hipstamatic has over 4 million paid users today, and makes a chunk of its income from in-app purchases of lens, flash and film effects. The company has released other apps, Swankolab and Incredibooth, but neither managed to make the same splash as Hipstamatic.

“These are the most authentic faux-vintage photos you can possibly make,” is how Lucas Buick, CEO of Synthetic, described the Hipstamatic look at a D-Series demo on Tuesday. That authenticity is hugely responsible for Hipstamatic’s success so far. The app was hyped organically, thanks to attention from celebrities, mainstream photographers, and major corporations.

It has been a natural marketing partner, hosting sponsored contests and making branded custom lenses for advertisers. Synthetic hopes to make those kinds of lucrative partnerships easier with a new creative design kit (CDK), also announced Tuesday. Through this CDK, companies will even be able to start their own D-Series groups, based on location or time-based projects.

The idea of waiting to see a digital photo is ridiculous sounding at first, but the social aspect does give it some charm and party potential. The D-Series creators seem so smitten with the old ways of photography, that they’re overlooking how today’s smartphone users consume photography. Cameras used to be disposable, but now the images themselves are. Increasingly, phone photography is less about having a photo to admire later, and more a way of announcing on social networks in real-time, “I’m here now, doing this cool thing.”

Refreshingly for a Bay Area startup, Synthetic hasn’t received any VC funding. Lucas Buick and Ryan Dorshorst built the original Hipstamatic app with just $300, including Apple’s developer fees. Over the past two years, the duo has grown into a full company with fresh digs in San Francisco, in a remodeled building that used to be a coffin factory.

Here are some screenshots of the new app: