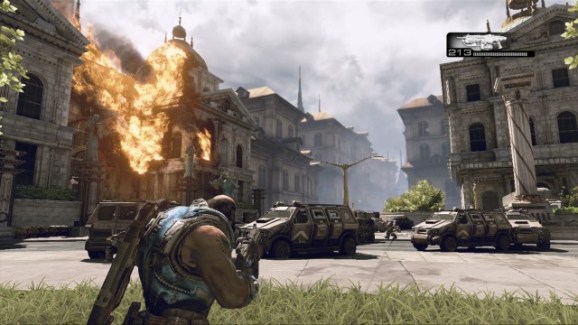 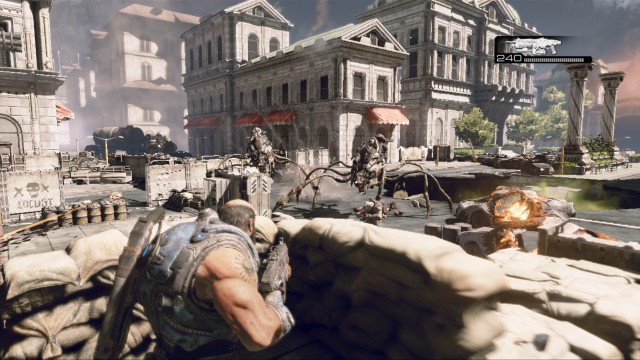 Update: A number of complaints have arisen stating that users are being charged for this DLC, despite owning the Season Pass.

Update 2: The Season Pass issue seems to have been remedied, according to Epic. If you were accidentally charged you should receive a full refund within a week.

RAAM’s Shadow is the latest downloadable add-on for Gears of War 3, launched in September by Epic Games on the Xbox 360.

Occurring some time after Emergence Day– the apocalyptic invasion of the subterranean Locust horde — and before the events of the first Gears title, RAAM’s Shadow sees the return of not only the locust general for which it was named, but also Lt. Minh Kim, Tai Kaliso, and two additional characters to round out the ill-fated Zeta Squad: Michael Barrick from the Gears of War comic books, and newcomer Alicia Valera.

It’s with the handling of these characters that the DLC’s issues begin. For whatever reason, the balding, grumpy Barrick takes center stage, sidelining the more prominent (and decidedly less obnoxious) Lt. Kim. It seems like an inexplicable blow to longtime fans looking forward to Kim’s return. Worse yet, Tai has to be, hands-down, the most poorly written character in the entire Gears of War universe, which is saying a lot for a universe filled with poorly written everything. He doesn’t speak much, but when he does, it’s the most ignorant, nonsensical garbage imaginable. If Epic was going for a sort of tribal, spiritual being that occasionally broadcasts his deep contemplation of the world, they missed their target by several miles. Lastly, Alicia Valera is such an undeveloped throwaway character, she could literally be replaced by a cardboard cutout and no one would notice. Expanded universe scholars will likely be wondering what a woman is even doing on the battlefield rather than at a birthing creche at this point in the timeline, but don’t expect an answer within the game. 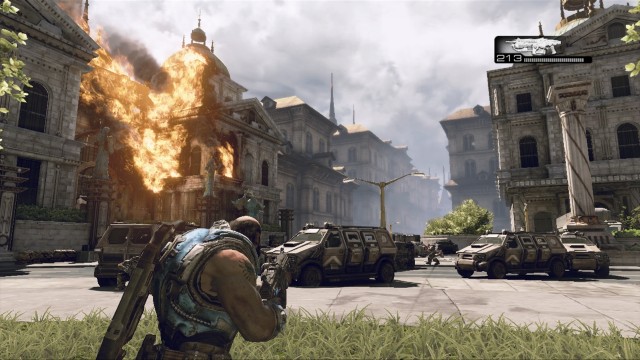 Gameplay not only remains largely unchanged, it actually seems to have regressed a bit. Rather than the relatively dynamic, glowie-filled battles in Gears of War 3, RAAM’s Shadow is comprised primarily of repetitive room-clearing and tedious, uninspired shootouts. The emergence holes (from which waves of Locust enemies emerge), which had seen less and less usage as the Gears of War franchise pressed on, return with a vengeance here. The five-chapter campaign will last roughly three hours, but I was repeatedly bludgeoned by dense boredom long before that. Even the boss battles are poorly integrated. Remember when Berserkers used to be a frightening spectacle? In RAAM’s Shadow you just hide behind a parked car and shoot them for 10 minutes until they die.

You can play as General RAAM himself during a few short sequences throughout the campaign, but his only two options are to stab and command Krill. After you’ve done either one a single time, playing as the Locust begins to lose its allure. And, just like with the human characters, don’t expect to learn anything relevant or meaningful about RAAM during your brief time with him. It’s all very unfortunate, as I was eager to experience something different for a change, and this DLC seemed to be promising that. I realized this was not the case around the time that I encountered a younger Jace Stratton who, despite Zeta Squad having plentiful amounts of extra weapons, was forced to run around armed only with a wooden baseball bat and annoying one-liners.

And that’s the worst part: Epic doesn’t even care that their story…their universe doesn’t make any sense. For example, why is Jack, the sole floating robot companion in the entire game franchise, the only character able to use extremely advanced cloaking technology? I inquired with Microsoft, and Executive Producer Rod Fergusson replied: “We created Jack to serve a number of purposes both for story and gameplay. But as far as it’s unique cloaking device goes, it was actually a game-play design decision to give it to him (and not lore) so that he could quickly vanish when combat started and not distract or interfere with the player. It certainly raised a few questions about why that tech was not available elsewhere, including my favorite Penny Arcade.” So three years have passed since being publicly lampooned for dubious design choices and yet there’s still no explanation for Jack, despite his increased role in the trilogy? Even Lost managed to tie together all of its increasingly absurd loose ends. Not in a satisfactory way, but at least they tried. 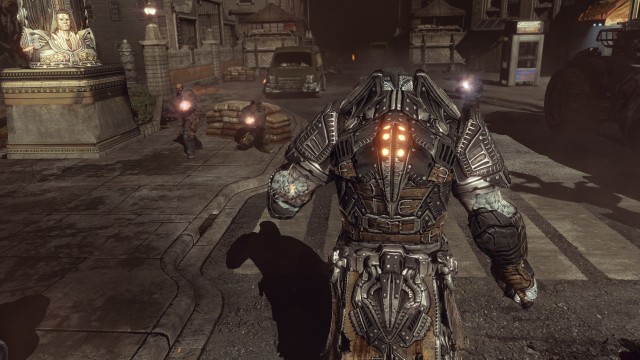 Weighing in at 2.0GB, RAAM’s Shadow doesn’t just add a sizable single-player offering, but also six new multiplayer skins. The entirety of Zeta Squad is now playable online, as is General RAAM himself. There’s also 250 new gamerscore to collect, though the corresponding Achievements aren’t particularly compelling. In fact, this entire DLC feels blatantly rushed, with notable technical issues, abysmal writing, and vanilla level design abound. What should have been the apex of Gears of War content thus far has turned out to be little more than a lump of coal for fans eager to expand their Gears experience this Christmas. 50 out of 100