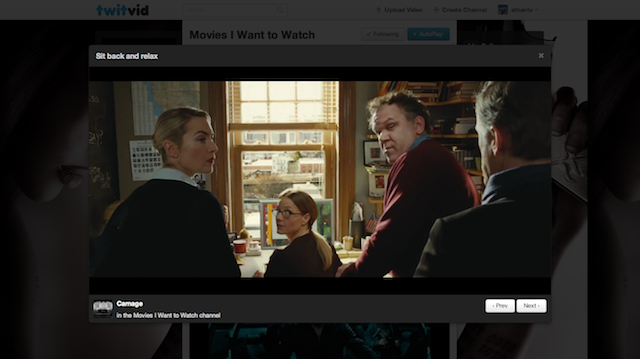 Social video sharing service Twitvid is launching an update to its website today that will transform it into a full-fledged social network.

Previously, the site was used as little more than a place to upload videos for Twitter and Facebook. Users could refer back to those videos at any time and share them. With the latest update, users can now follow topics, people, or brands that interest them and see a personal feed of video. They can also watch videos from YouTube, Vimeo and Twitvid.

One of the biggest changes to the new version is the ability to easily create, organize and share public or private channels. Each channel operates as its own separate stream of content that gets curated by an individual. All the videos within that channel come from uploads to Twitvid or shared videos from YouTube and Vimeo. There’s even a setting that allows the channel videos to automatically play consecutively, mimicking the functionality of a traditional television channel.

With the number of high-profile accounts on Twitvid, the new functionality has plenty of opportunity to keep people entertained. The site already has celebrity account holders like Justin Bieber, Dane Cook, Tyra Banks, LeBron James as well as politicians Al Gore and John McCain.

As for the future, Twitvid plans to add support for more video services like Hulu and Blip.tv, Twitvid CEO Mo Adham told VentureBeat. He also said the service will gain more social features that will allow people to watch the same videos at the same time.

“When you watch most video channels online with friends, the experience kind of sucks. You can’t actually be in the same room as them so there’s always a disconnect,” Adham said. “We want to change that and make our video channels truly social on another level, too.”

Founded in 2009, Twitvid has over 12 million monthly unique visitors. The startup closed a $7 million round of funding from Azure Capital and Draper Fisher Jurvetson in September 2011.