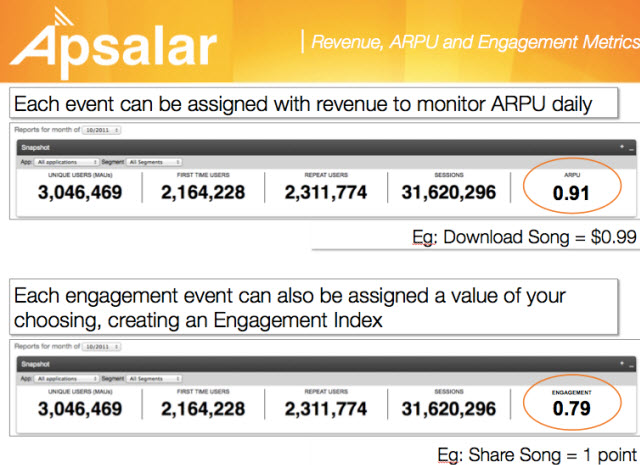 The San Francisco company, a veteran of DEMO,  is announcing today two new analytics tools aimed at measuring engagement of players and its relationship to higher revenues per users. The tools can be used together to create a user engagement index and to optimize the revenue generated from each user.

The tools will be part of a free suite of ApScience analytics tools that Apsalar already provides to more than 2,000 customers with 45,000 apps in the mobile app stores. Those apps have been downloaded 20 million times. Customers are already using the tools because they give mobile app publishers unprecedented levels of information on users, their progress in games, and just how much time they spend playing. They can then group users into cohorts, a groups of individuals with similar characteristics, and then run analyses related to how much revenue those users generate. Apsalar calls the engagement tools its Mobile Engagement Management platform for both iOS and Android apps.

Publishers use the numbers to figure out what to do next. Apsalar also provides targeting tools that it charges for. Those help the publishers target special offers to users who can be prompted to get more engaged or to spend more money. The resulting information includes average engagement per user and average revenue per user. That data helps publishers predict how much money they can make from a game. If publishers make macro changes to their mobile apps, they can measure the change in engagement and revenue.

One of the company that plans to use the new tools is Gameview Studios, a mobile game maker acquired by DeNA of Japan. Riz Virk, chief executive of Gameview, said the data is critical in helping to guide product and business decisions. It can be used to calculate the lifetime value of a customer, or how much revenue that customer will generate over the life of a game. Figuring out who pays and who doesn’t is very important to mobile game publishers, who are largely shifting to the free-to-play model, where users play for free and pay real money for virtual goods. Through careful analytics and promotional targeting, companies can raise the percentage of users who pay and how much they spend.

With the tools, developers can track anything, such as a player reaching level 5 in a game and its correlation to the likelihood of that user buying virtual currency. The point is to provide customers with actionable data about their users, said Michael Oiknine, chief executive of Apsalar, in an interview.

“We’re taking analysis to the next level,” he said. “We’re already monitoring a few billion events a month.”

Apsalar was founded in 2010 and its backers include Thomvest Ventures, Battery Ventures and DN Capital. the company has raised $6 million to date and it has 20 employees. Rivals include Flurry, Claritics and in-house analytics at game companies.