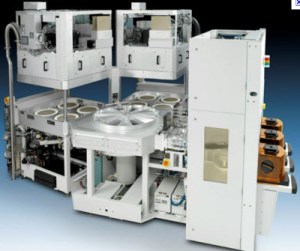 Two big chip manufacturing equipment companies are getting together so they can take on the giant of their industry. Lam Research said today that it is acquiring Novellus Systems for $3.3 billion in an all-stock deal.

Novellus shareholders will get $44.42 per share, at an exchange ratio of 1.125 shares of Lam for each Novellus share. That is a 28 percent premium above the Wednesday closing price for Novellus.

The two Silicon Valley companies compete against Applied Materials, the multibillion-dollar giant of the industry. All of the companies are fundamental to the success of the $300 billion chip industry and chip makers such as Intel and Samsung, which make the building blocks of everything electronic. The equipment makers such as Applied, Novellus, Lam and others create the multi-million-dollar machines that process chips in hundreds of steps as they make their way through a production line within factories that can cost as much as $4 billion.

The timing of the deal reflects a slowdown in the industry, which is being weighed down by the economy at the same time it is buoyed by demand in emerging markets for computers, smartphones, and tablets. The whole industry has been hurt by flooding in Thailand, which has curtailed production of hard drives and slowed demand for Intel’s chips.

The combined company will keep the name Lam Research and will be headed by Lam’s Martin Anstice, president and chief operating officer. The companies want to have annualized cost savings of $100 million by the end of 2013. Anstice is taking over after Lam chief executive Stephen Newberry retires in January. Lam will buy back about $1.6 billion of its stock as part of its deal.

Lam shares closed Wednesday at $39.48 on the Nasdaq, while Novellus shares closed at $34.70. The deal is expected to close in the second quarter of 2012.