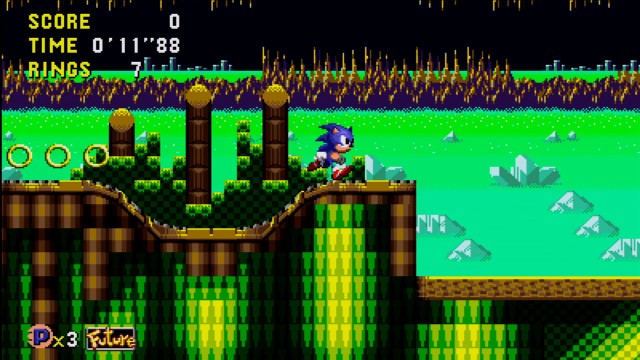 Sega of America has announced that Sonic CD is now available across a multitude of platforms today. Originally released in 1993 for the Sega CD, this version of Sonic CD  comes boasting both the Japanese and US soundtracks, and the exclusive ability to play as Tails, Sonic’s flying sidekick fox. The game will likely appeal to older gamers who are nostalgic for the games of their youth.

“Sonic’s 20th Anniversary has been a banner year for him – as well as for everyone at SEGA,” said Haruki Satomi, Senior Vice President of Digital Business at SEGA of America. “Gamers around the world are rediscovering their love of Sonic through his adventures, new and old. Whether you are a long-time hedgehog aficionado looking to enjoy a favorite moment from Sonic’s past, or a brand-new player who wants to join in on the fun, there is no better place to start than with one of Sonic’s most celebrated games, Sonic CD.”

Relying on HD nostalgia has become a standard play for many publishers these days, though at the budget prices it’s hard to complain. Sonic CD was known for its unique time-traveling aspect (completely optional, for those who prefer to blast through the game as quickly as possible), inventive level design, and the first appearance of the villainous Metal Sonic. Oh yeah, and it has one of the most awesome opening theme songs in video game history:

Sonic CD is available now on Xbox Live Arcade for a mere $5. Android and iOS versions will be available by December 15, for a limited-time price of $1.99. PlayStation owners will have to wait until December 20, when Sonic CD is released on the PlayStation Network for $4.99. A Windows Phone version is planned for next year.