Exercise good for your health (but boring), while video games are fun (but make you fat). A startup called BitGym is hoping to combine the best aspects of the two with a workout app for the iPhone and iPad that turns exercise equipment into video game machines.

The company has just released Virtual Active, an immersive fitness app with 10 different workout environments. Put your iPhone 4 or or iPad 2 on the magazine rack of an exercise bike or a elliptical machine, and within seconds you’re inside a virtual world that responds to your every movement. While jogging on the treadmill or riding an exercise bike, Virtual Active detects your speed based on vibrations and ferries you through a virtual mountain bike trail in the Swiss Alps, the narrow canals of Venice or the lush, or temperate environs of the Pacific Northwest.

The app isn’t directly connected to the exercise machine’s electronics. Instead, pedaling the exercise bike sends vibrations through your device to make you move faster or slower. Your head movements are tracked by the forward-facing camera for direction control. Move your head right or left your avatar will respond accordingly.

Since launching yesterday in the App Store, 8.5 percent of users have made an in-app purchase, says co-founder Alex Gourley, and the American Southwest environment pack and Northern Italy are the most popular. BitGym has also been contacted by two major fitness industry players for potential collaborations, Gourley said, though he wasn’t at liberty to discuss who they are.

Here’s a tip: If you’re reading this at your desk and you want to try before you buy, open the free Southwest U.S. trial pack, set your phone on a flat surface, and tap the edge vigorously. This will simulate the vibrations registered from exercise equipment, and will allow you to see Virtual Active in action. 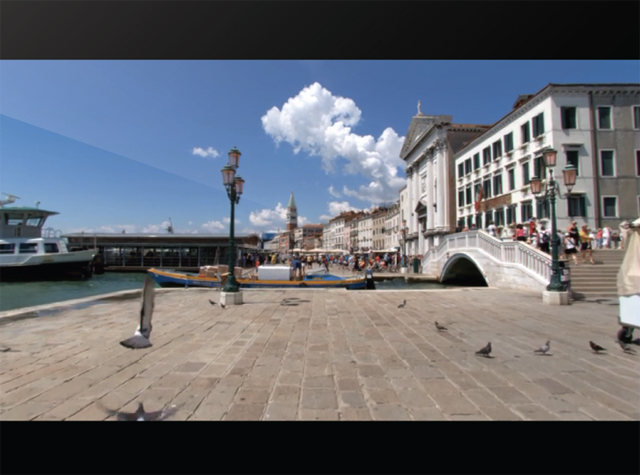 Above: The Canals of Venice course

Due up next from BitGym is another app called Fit Freeway, which takes the exercise concept to a virtual racetrack. Think of your exercise bike as Mario Kart, and you’ve got a pretty close approximation. Sky Runner is another upcoming title, which is like Starfox on your Stairmaster.

San Francisco-based BitGym is looking for investments to help outflank any potential imitators.

“Once people realize you can do this, there’s going to be a lot of competition and a lot of people are going to try to do it,” BitGym co-founder Josh McCready told VentureBeat. “We want to get momentum and keep developing it.” One potential rival is iFit, whose apps allow runners to navigate through a Google Streetview map, but don’t have gameplay functionality.

BitGym is focused on developing single-player games for now. Asynchronous multiplayer games could follow soon, where two or more players could log their achievements in Apple’s Game Center and challenge friends to beat a high score the next time they use their exercise equipment. An app store for developers of new environments or workouts is also a tantalizing prospect. Once the notion of playing video games through an exercise bike catches on, other developers may want to sell their workouts through the BitGym App Store.

More than 41 million American adults have access to exercise equipment such as a bike, elliptical or treadmill in their homes, Gourley estimates, and gyms bring this number t0 more than 74 million. Last week we reported that Apple sold more than 30 million smartphones, and as many as 13 million tablets in Q4. Put the two together, and the potential reach of an app like Virtual Active is considerable.