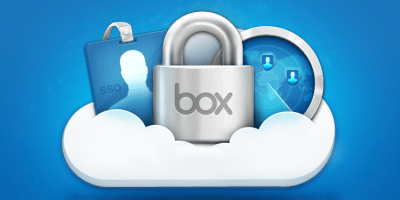 Cloud storage company Box announced three new security features and a partnership with Intel today, in hopes of bringing cloud security to a place where CIOs are no longer afraid of it.

The cloud is a very useful place to collaborate and share projects, photos and files, quickly. It offers the kind of speed and productivity that businesses are always after, but a lot of IT administrators are concerned about security. While attending a conference for chief information officers in Scottsdale, Ariz., Box’s director of enterprise product marketing, Robin Daniels, saw that fear. The CIOs reported that a lot of their employees were starting to use personal clouds, which put proprietary information at risk for discovery.

“I think this phenomenon has come up really quickly with the rise of people bringing their own devices [to the workplace],” said Daniels in an interview with VentureBeat. “This only started two to four years ago.”

Today, the company introduced more secure links, more device control from Box’s Trusted Access management system and the ability to create groups for those users connected to an Active Directory. 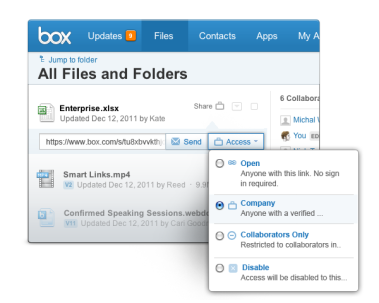 Links are a favorite with cloud sharing. They are an easy way to give a person, who may or may not be familiar with cloud computing, access to your files. The ease, however, is what scares IT administrators. There’s little to stop a link from being forwarded on and opened by someone without permission. What if someone was sharing information about the venture firm that just invested in you and somehow your competitor got hold of that link?

IT admins obviously love snafus like that, so Box put in restrictions on the links. Before, you could password protect and put an expiration date on links, so they would die in a matter of days. Now, you can control what the link receiver can actually do with that link. In particular, these controls look at who you share the link with. Upon sending, you can tell the link to open only if it is in a certain domain. To limit it even further, you can share with only people on that computer. If the content is only to be shared with a group, you can restrict it to certain people by inviting them to be a collaborator in the folder. If the link has somehow become completely compromised, you can disable it.

It’s that ability to reach the IT hand out and yank back sensitive information that administrators want. With the new functions in Trusted Access, Box’s management system, IT administrators can better handle the bring-your-own-device environment. Originally, this management system only tracked logins from browsers, but it now has jurisdiction over mobile. IT can decide which devices a particular user can access their Box account from, and it can monitor the Box activity on those devices. It can see what files have been opened, as well.

Lastly, those Box customers who also use Active Directory, in essence a one-stop-management-shop for IT administrators controlling Windows computers, can now create groups. Pre-existing groups of people designated in the AD system will automatically sync to Box. Those who login to the Box system will immediately be given permissions based on their AD groups.

The partnership with Intel is also designed for ease of use. Intel has a similar solution to the AD called the Intel Expressway Cloud Access 360. Very simply, Box and Intel created a single sign-on for IT administrators to manage groups within the Expressway. It’s an easier way of going back and forth between the management system and Box and allows for similar group and permissions populations based on what has already been set up in the Expressway.

Box is winding down its 2011 initiatives as mid-December hits, but 2012 will be filled with more engineering hires and attempts to attract the bigger enterprises to its customer roster. Daniels, who comes from working on Salesforce’s Chatter, a social business product for enterprises, says Box will be focusing on its social aspects in the coming year. The company also wants to gain more certifications in security, to bring even more comfort to CIOs.

The company is launching these features in 2012 and is now also offering unlimited storage to its enterprise clients.