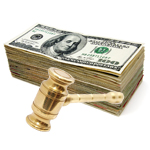 Startups usually face several legal hurdles in the early phases of creating their businesses. Several law firms in Silicon Valley make their money by helping these startups get up and running, often for a hefty price. In 2011, Silicon Valley attorneys made an estimated $37 million in revenue from startups alone. Most of the money that startups raise in their first rounds of funding goes directly to legal fees; the average bill for series A financing is over $50,000.

One important statistic uncovered is that the annual growth of business formation is approaching pre dot-com bubble times. Startup growth for 2011 is close to 30 percent, the highest its been in over five years.

While law firms are making a lot of money off startups in Silicon Valley, they are also trying to get more tech savvy. AttorneyFee found growing Twitter presences, website views, and Klout scores among law firms and attorneys. See the infographic below for more stats about startups and the legal teams that help get them off the ground.