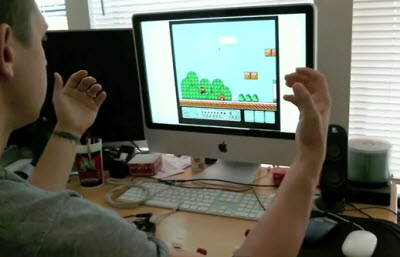 Biomedical company Advancer Technologies has created a plug-in-play device that allows players to directly control video games with their muscles using the power of electromyography (EMG).

Using the low-cost, yet powerful Arduino UNO microcontroller, the universal serial bus (USB) Biofeedback Game Controller allows four muscles to act independently or in combination with each other to control over four buttons.

Advancer Technologies is showing off the device in a new video, where a man navigates his way through the first level of Super Mario Bros. 3 using only his muscles.

The company says the controller can be used for practical applications like helping victims of neuromuscular disease or injury rehabilitate their muscles while playing video games. “[Plus] using your muscles to control computers, robots, [and] video games is fun no matter what your age,” the company says.

Advancer Technologies is offering others the chance to make their own USB Biofeedback Game Controller through a detailed tutorial at Instructables.com.