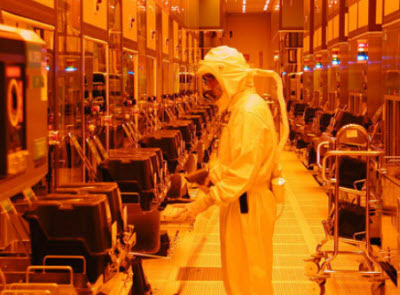 Semiconductor industry executives worry that profits and revenue are sinking, and they don’t plan to hire as many people as they did a year ago.

That’s not particularly encouraging, as the semiconductor industry — the source of chips that go into everything electronic — is the backbone of the tech economy. About 41 percent of chip industry executives say they expect revenue will grow more than 5 percent in 2012, compared with 78 percent a year ago and 87 percent in 2009. About 30 percent expect profits to increase by more than 5 percent in the next 12 months, compared with 37 percent last year, according to a survey by accounting firm KPMG.

The Semiconductor Business Confidence Index, a metric based on survey data, measured 46, compared to 60 in 2010 and 61 in 2009. The higher the number, the higher the confidence. This index has risen from 36 in 2008, the year the global economy imploded. That means that the forecasted conditions for the chip industry won’t be as severe as the beginning of 2009.

“It is not unexpected to see the industry take a breath after two strong years following the economic and industry downturn,” said Gary Matuszak, KPMG Global Chair for the Technology, Media and Telecommunications practice. “Executives continue to pursue their growth agendas, and will be acquisitive, but remain very apprehensive about the direction of the economy.”

During the first 11 months of 2011, 98 semiconductor merger and acquisition deals were announced, down 8.4 percent compared to a year ago, according to a separate report by the Global Semiconductor Alliance, a trade group.

In other data from the survey, semiconductor executives believe in the increasing importance of the U.S. market. In 2008, 38 percent of the executives said the U.S. was an important market for revenue growth, behind China (79 percent), Taiwan (44 percent) and Japan (40 percent). But now 50 percent believe the U.S. is an important market — second to China at 60 percent and Japan at 37 percent. A year ago, 47 percent believed the U.S. was important. Wireless communications, computing, and consumer applications are providing the strongest demand for chips.

“China’s decrease in importance might be the result of the Chinese government’s tightening in lending, but it is clear that the industry sees the China and U.S. markets as the two most significant global end markets for growth,” said Ron Steger, partner in charge, KPMG Global Semiconductor Practice.

Increasingly important are the alternative energy and medical application markets for chip makers. That suggests that the trough in renewable energy may be bottoming out.

KPMG surveyed 155 business leaders in October and November for the survey. Half the companies in the survey have revenues of $1 billion or more. About 64 percent of chip executives say revenue will be hurt 3 percent or more by counterfeit products. A third said the impact was 5 percent or more. A third of the respondents said there will be an increase in the number of intellectual property infringement cases.