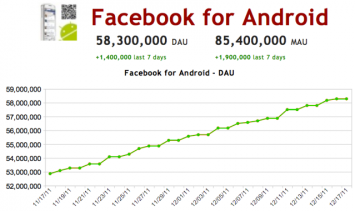 Facebook‘s Android app passed the iPhone in daily active users today, but is still trailing behind when it comes to monthly activity.

According to analytics reports by AppData, the Android application had 58.3 million daily active users on December 17, as opposed to the iPhone’s 57.4 million DAU. Indeed, Facebook is the most popular Android app for users 18 and older, according to a Nielsen report. The social network’s app came right after the Android Marketplace as most used application for Android users between the ages of 18 and 44, which means Android users of a wide age range are paying attention to what Facebook is doing in their mobile strategy. Now they’re starting to pay more attention daily. 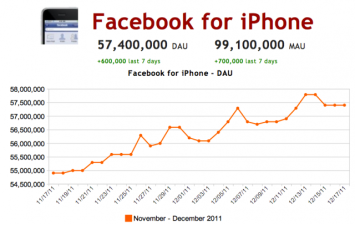 Android in general owns the most market share at around 40 percent proliferation, but when it comes to activity on Facebook’s mobile app, iPhone has rung king. The new shift in daily active users may be a natural favoring of the operation system with the biggest share of voice, but it may also be a lot simpler: Facebook recently updated its Android app. Before Android users had a chance to experience it, Facebook updated its iOS applications with a new sidebar and easier navigation around the app. It was faster, sleeker and Android users were still stuck with the older, slower version. Only 11 days ago, however, Facebook updated the Android app, giving it the faster features and new navigation iOS users were enjoying. When you user experience is made faster and the interface easier, you’re more willing to use the application, right?

On top of that, Facebook released the anticipated Timeline feature on Thursday, and with it another update to the Android app to support the feature. This time, as TechCrunch points out, the iPhone app’s Timeline compatibility was not updated until Sunday. This gave Android users access to an exciting new feature on a device iPhone users didn’t have access to. During this time, iPhone users probably spent more time on their web Facebook versions, if only to play with Timeline.