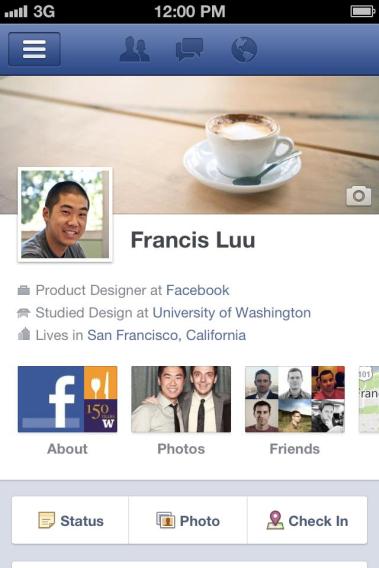 If Facebook had a Timeline, today it would read, “became friends with iPhone.” The company released an update to the application today, supporting Timeline, along with a couple new improvements.

The update, 4.1, allows people to view Timelines like they would on the mobile and regular websites. The company released updates to its Android application and mobile websites on Thursday, shortly after the Timeline itself rolled out worldwide. Why Facebook decided to wait on the iPhone application is unclear, but it is here and promises to have “faster performance.” Along with the Timeline, friends lists are now added to the black navigation bar in the app. You can add people to your lists, as well as view all your lists in one place.

In addition to friends lists, Facebook has built in support for the “subscribe” feature. Just like lists, you can view who has subscribed to you, if you have the  the subscribe feature turned on, as well as those who you subscribe to in one place.

Navigation has gotten a little less interrupted as well. Instead of clicking the notifications button and being taken to a new screen, now notifications and messages appear in a drop down box. The box is easy to click out of and you can easily return to the page you were on. Photo upload time has also become faster, and commenting has become sleeker.

The Next Web reports that Apple has not yet updated its iPad app, however, it plans to soon. You can download the iPhone app here.

Hat tip The Next Web