How the hell do you write a review for a game that’s been out since 2009? A game that you’ve played across many changes, with additions and subtractions, a game without a box, a user manual, or, really, any sort of guiding pedagogy. I’ve personally spent at least 100 hours, probably more, playing this procedurally generated oddity of a video game across the beta and official versions, on servers, my own server, and in single player modes. And yet, I still can’t seem to get a simple handle on it, and why it keeps me coming back for more.

I first experienced Minecraft as many geeks did – I read about it and was intrigued enough to grab it and download it. I spent the $20 to create an account so I could play the game offline. It seemed worth it, if all the other geek gamers I knew were right.

The game as I played it first was one of “holy crap now what?” I was there, a disembodied blocky arm in a preschool-colored world. There were trees, pigs, cows, trees. I pressed the ‘W’ key and walked and walked and walked. And then night fell. And then I died, only to respawn back where I had started.

It took several of these false starts till I did what any good geek gamer will do – I Googled the hell out of it. Turns out, there was many a guide on “surviving your first night in Minecraft.” They all went something like this – knock the crap out of some trees until they fall apart in weird blocky wood pieces, pop them into your inventory (with that glorious popping sound), and then go find a mountainside with some coal in plain view. Do all this before nightfall, because the monsters come out at night. Sssssss….BOOM. Creepers will get you. Or Zombies. Or spiders making odd straw slurping noises. SOMETHING is gonna get you, so grab that wood, and some coal, and dig into that mountain, my friend. Craft some torches (handy recipes were provided in these survival guides), build a wall between you and the monsters, and pound that torch into the wall. Wait for night to be over. Just ignore all the horrifying sounds outside the tenuous boundary you’ve just created. You’ll be fine.

Rinse. Repeat. And yet? There was so. much. more. to learn. 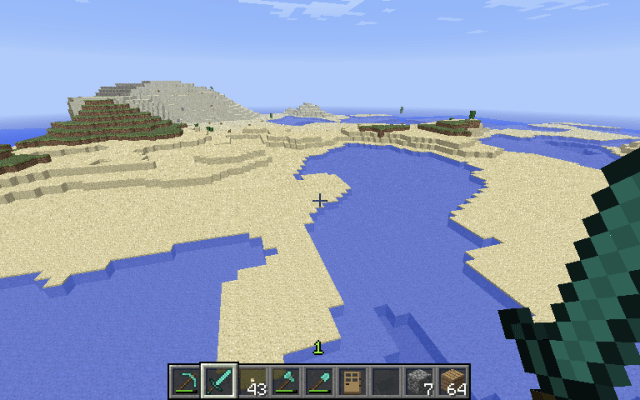 That is the draw, for me and for thousands of players. Minecraft brings, literally, a whole world of potential. The ruleset is deceptively simple – there’s day, and night. There are monsters, lava, water, and tall things you can fall from or into – all great ways to get to that respawn. If you respawn, all your carefully crafted items are left where you die. Good luck finding them again – the visual aesthetic is unhelpfully regular.

Crafting consists of taking raw materials, putting them into either an inventory or workbench grid, and creating something new out of different ingredients. Sometimes, ore needs to be cooked in a furnace, using coal that’s been dug out of the ground. The recipes are visual and only found on the internet. There is no way, in game, to figure this stuff out. And that’s a good thing. It’s like one big gaming Easter Egg hunt, with only the cool kids getting the best stuff. If, of course, by cool kids I mean folks able to sift through literally thousands of sites, videos and wiki pages. And I do.

Let’s talk mining. If you have any bit of obsessive-compulsive tendencies, you might want to steer clear of this game. I had no idea how compelled I’d be, digging regular pathways down into the game earth. Cube by cube, learning new ways to efficiently cut downward into the skin of the world from friends and YouTube, I found myself paying more and more attention to the patterns I created while digging. Every once in a while, iron, coal, gold, lapis lazuli, and even diamond blocks appeared seemingly at random. I knew, somehow, that if I just figured out the pattern, I’d be able to get all the iron and diamond I needed. Just a little more digging, a little more risk at falling into a lava pit or running into a cavern filled with arrow-shooting skeletons. I’d find the good stuff randomly, at variable intervals — the same reinforcement system that keeps gamblers coming back for more. I dug and dug and found materials, smelted iron weapons, crafted diamond armor, found monster spawners and gloriously brilliant lava flows. I lost my way more than once, over and over in fact – it’s dark down there. I’d carve my way to the surface, digging out stairs leading upward.

My fingers cramped and sore, my eyes craving different colors than the gray walls and earth toned gravel blocks deep within the mountains and mines of my own making, I dug upward for long tens of minutes. I’d crawl, slowly blinking, out of the torchlight and into the full light of day, learning how to build up and up and up and up. I began building platforms in the sky, jumping up and placing blocks of material under my feet that I might get ever closer to the sky, past the clouds, right up to the very tallest point in Minecraft, where no other blocks can be placed.

Minecraft is nothing if not immersive. 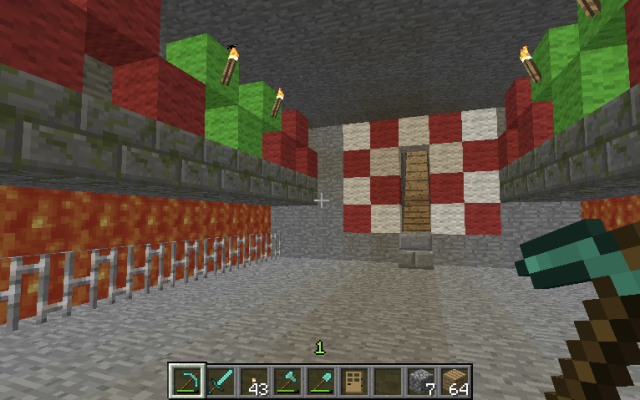 The recent 1.0 release has a few differences from the original beta I began playing. It’s got experience points, a new health system that allows players to recharge their health as long as their hunger meter is filled up, a marked change from the one to one “eat a porkshop and gain some health back” days of yore. Now there’s more to manage, but less fear of dying from too many cumulative hits or falls. Just make sure to eat those pork chops. And mushroom stews. And, yes, even cake. The cake is not a lie, it just takes some eggs, milk (in an iron bucket that must be created in a furnace), sugar refined from sugar cane plants and some wheat, which can be grown topside with any sufficient sunlight and water supply.

If I continue to digress, perhaps that’s the point. Minecraft is one continual digressive experience. Once you get the hang of surviving the night, indeed several nights, you then start building and mining. Craft doors, open them with pressure plates, grow your own trees fast with bone meal you’ve pulled from the bones of skeleton mobs you’ve defeated. Build a house, put up bookshelves, create a bed, put paintings on the wall. And don’t get me started on running your own server, inviting some trusted friends, and seeing what the world, continuously pervasive while the server runs, will evolve into. We had a scale model of an actual U.S. aircraft carrier next to a three-story glass building on top of an incredibly organized and labeled multilevel mining operation. I created a castle upon the ramparts of a nearby mountain, while others created a thousand-blocks long tunnel to a new area of the map we christened, “New Holland.” There’s nothing like this game.

A new mode was given an official place at the table with the release of Minecraft this past November – Creative Mode. My kids found this mode in an update to the beta at some point. I figured this out because they were flying around their single player worlds, making the most horribly multicolored structures across the land. In Creative Mode, players are given a quite thorough set of the basic building blocks of the Minecraft system, the power of flight, and no monsters to speak of. It’s a Lego-builder’s dream, enabling us all to create a playskool-themed Second Life environment with no restrictions, no challenges other than that of taking what’s in our heads and translating it to the Minecraft play world, one cubey block at a time. 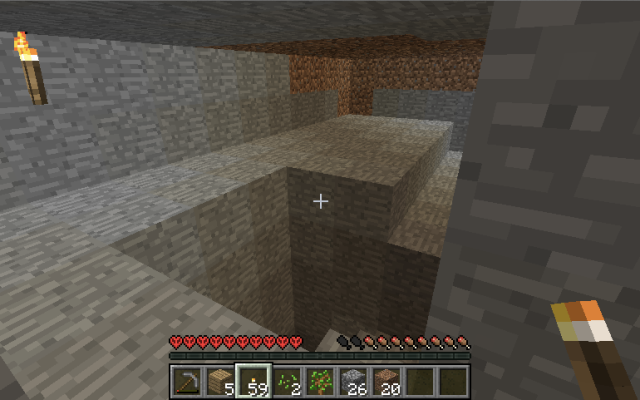 There’s a third mode, of course, for people like me – Hardcore mode. This is, in my opinion, the ultimate purists Minecraft mode. Create a new world, live in it just like Survival Mode, with one simple difference: if you die, there is no respawn. You are finished. Done. That world cannot be accessed again. It’s Ben Abraham’s Far Cry 2 Permadeath experiment writ small and pixellated, and it’s tremendously compelling. I’ve been living in my own private hardcore Idaho since the mode was released, loving every minute of it. I’d surely love to have friends come visit, provided I could trust them not to set me on fire with a lava block they carefully secreted in a metal bucket from some underground lair. Yeah, Hardcore Mode is serious business.

In this official release, there’s also an ending. What? The developers have taken upon themselves to create a “primary win condition,” which is a fancy way of saying ending. In fact, to trigger the ending, you need to build a portal to an alternate dimension known as The End and then defeat the deadly Enderdragon that flies around. See? They even call it The End. Crazy, I know. Why is this even in the game? Might it be a clever statement on the completion needs of a more mainstream audience? I’d like to think so, given the developers’ hardcore indie aesthetic. However, it may just be a way to provide us all with a way to step away from the computer monitor and get some vitamin D, perhaps. Says lead developer Markus Persson, “For survival mode, I’d rather make the game too difficult than too easy. That also means I’m going to have to include some way of winning the game (or some other climax) to prevent it becoming too exhausting.” So there you have it. 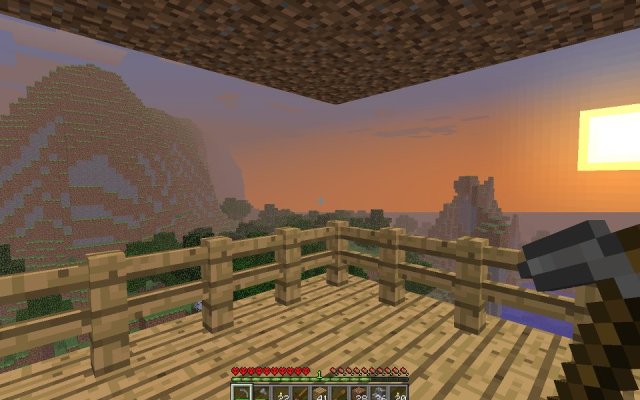 So, Minecraft, the review? It’s impossible. There’s only experiential description to keep this reviewer from falling into a recursive, procedurally generated nightmare of Borgesian proportions (and shuddering at each use of the word “you” in a professional review). If we must, then, score this kind of game, we give it a 90/100. Whether you find joy in creating the Taj Mahal in square-ish blocks, building sky castles with friends in multiplayer, or derive an obscure satisfaction of a good life well lived in Hardcore mode, Minecraft abides. The cost is low and the computer specifications are fairly generous. Mac or PC, you can play this game. And you should.