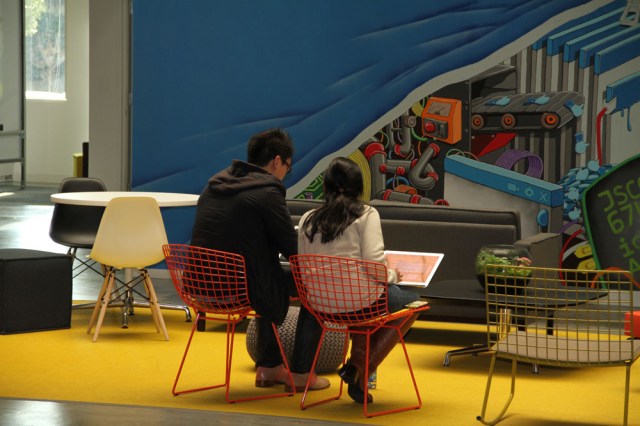 It may not have the ring of Beverly Hills, 90210, but Menlo Park, 94025 is arguably the most elite zip code in the nation now that Facebook has moved to town.

As of Monday, the world’s largest social network is officially headquartered at 1601 Willow Road in Menlo Park. The new eco-friendly, private office- and cubicle-free compound houses Facebook’s 2,000 local employees. It’s a 1 million-square-foot space that could one day hold up to 9,400 staffers, spanning East and West campuses.

“This morning, the final wave of employees walked through the doors of the new Facebook Menlo Park campus, and my team greeted them with coffee, snacks, and maps to help them find their new desks,” John Tenanes, director of global real estate for Facebook, wrote of the big day. “For years, we’ve been moving from one building to the next, but now we finally have a home in this ten building campus.”

The entire campus is connected via a single central courtyard, and features hallways lined with chalkboard paint (employees get their own chalk), micro-kitchens for free snacks, and hundreds of glass-walled conference rooms and couch-heavy breakaway spaces Facebook calls “cozies.”

The company is still completing construction on the West end of the campus. Eventually, the headquarters will also have two full-service cafes, two coffee shops, a gym and on-site doctors.

The quirky and colorful office space hides a few fun Facebook-infused goodies. IT vending machines, for instance, dispense computer accessories that employees can nab at anytime — free of charge. “If employees need new accessories like a keyboard, mouse or power supply, they can swipe an ID card at a vending machine that dispenses equipment,” a company representative told VentureBeat. “The vending machine cuts overhead but still tracks technology costs.”

And there’s more to this campus than at first meets the eye. The new home of Facebook features a plethora of recycling options, a rich transportation program for employees (read: free rides for all) and even recycled doors. “There isn’t a single new door on the campus — they’ve all been recycled from those used by our predecessors,” Tenanes said.

The move has been months in the making, and was actually completed over three stages, starting with 500 employees in August.

Now that Facebook has settled into its brand-spanking-new digs, the company is bound to use its cushy and imaginative address as a recruiting tool — especially as it looks to enhance its profile (or Timeline, if you will), go public in 2012, and stay competitive in engineering and executive talent wars with the likes of neighboring Google.