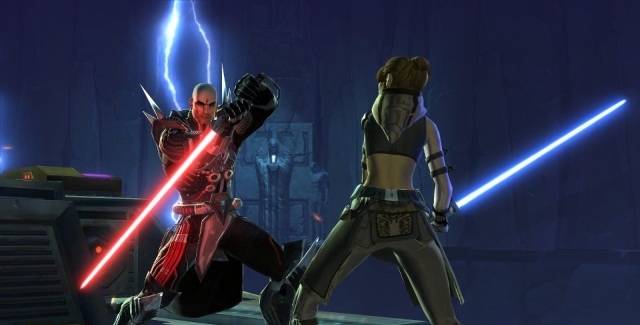 Blizzard Entertainment’s World of Warcraft could soon be feeling a great disturbance in the Force, as if millions of subscribers suddenly cried out and started heading for a galaxy far, far away. Star Wars: The Old Republic is an impressive and easy to play new competitor from Electronic Arts that makes great use of the Star Wars license. It is the most promising new massively multiplayer online role-playing game (MMORPG) since World of Warcraft claimed the genre’s throne seven years ago.

The Old Republic developer, BioWare, obviously studied the market leader’s playbook and relies on many tested game play mechanics. But it also added excellent storytelling, dialogue choices and companion characters in the tradition of the studio’s renowned single-player RPGs. The result is an engrossing and addictive online game that is particularly welcoming to solo adventurers and newcomers alike.

Having one of the most prolific science fiction universes to play with doesn’t hurt. Set thousands of years before the events of the Star Wars movies, The Old Republic delivers an original take on George Lucas’ saga. It’s lacking the star power of Luke Skywalker, Darth Vader or Han Solo, but allows players to create their own Jedi Knight, Sith Warrior or Smuggler in the mold of those iconic characters. Among the 17 worlds are recognizable movie settings such as Tatooine, Hoth or Coruscant. 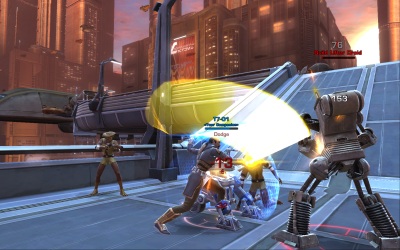 Electronic Arts has much riding on The Old Republic, which was a major reason why the publisher purchased development studio BioWare (and the now defunct Pandemic) for $860 million in 2007. The game’s budget is reportedly in the range of $100 million dollars. The payoff could, however, be substantial, as users must shell out a monthly subscription fee ($12.99 – $14.99 depending on the term length) if they want to continue playing, as the $60 game comes with just one month of included server access.

Electronic Arts management has repeatedly stated that the game would be profitable with half a million subscribers, a modest amount in light of World of Warcraft’s 10 million player numbers. But it’s a big gamble on a business model that hasn’t worked well for most others. MMORPGs like EverQuest II, The Lord of the Rings Online and Dungeons & Dragons Online switched from mandatory subscriptions to a free-to-play model with optional in-game purchases and reportedly increased both player numbers and overall revenue.

Climbing the ranks in the Empire and the Republic

At the beginning of the game, players pick one of two sides for each of their game characters, the “good” Galactic Republic or the “evil” Sith Empire. Each faction offers four starting classes which are mirrored on the other side. The Jedi Knight is a lightsaber-wielding melee fighter like the Sith Warrior, the Smuggler shares his cover abilities with the Imperial Agent, Troopers use similar gadgets to Bounty Hunters and Jedi Consulars cast force magic tricks just as Sith Inquisitors do.

At level 10 players choose between two advanced classes with slightly different strengths. For example, a Bounty Hunter can learn additional healing skills by becoming a Mercenary or gain tanking abilities instead by picking the Powertech specialization. Further character customization happens in three class-specific skill trees, where bonuses and additional skills are unlocked by spending points.

For my Sith Inquisitor, I chose the Sorcerer advanced class, which offers the trees Corruption (healing), Lightning (dealing damage) and Madness (weakening enemies). In order to get access to one of the top skills by character level 40, I need to limit my point spending to one of the three trees. Being able to specialize a character class in this way is a welcome feature, though the way to the top-tier skills doesn’t allow as many interesting choices as World of Warcraft’s sophisticated talent tree system. 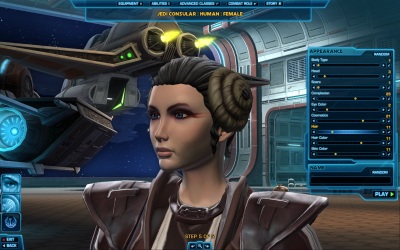 Character creation also offers a good deal of visual customization, with several prominent Star Wars races to choose from. For example, by selecting the Zabrak race and tweaking the horn and tattoo patterns, I was able to create a pretty convincing Darth Maul wannabe. And devotees of Princess Leia’s hairdo will be delighted that her classic buns are one of dozens of hairstyle options to choose from.

But who would play a non-Force character when Jedi and Sith classes get to swing customizable lightsabers and use crowd pleasers like Force Choke or Lightning? I would, because BioWare made the regular guys sufficiently powerful and cool. The Trooper/Bounty Hunter classes are pretty badass with gadgets like sticky grenades, flamethrowers, missiles and jetpacks. Smugglers/Imperial Agents have a unique cover mechanic that grants them defensive bonuses while they are hiding behind objects. It’s somehow hard to believe that a single Imperial Agent is an equal match to a Jedi Knight, but for the sake of game balance I’ll gladly swallow it.

According to BioWare co-founder Ray Muzyka, the studio’s core vision is “to deliver powerful, immersive experiences that engage our players emotionally”. For years The Old Republic’s developers have been emphasizing that they would bring a “fourth pillar” to the MMORPG table, with “story” joining genre staples “exploration”, “combat”, and “progression.”

It’s not that other MMORPGs haven’t incorporated intriguing story lines. Just look at the massive Warcraft fiction. But truth to be told, compared to the standards of modern single-player games, the story presentation in MMORPGs sucks. The typical quest in World of Warcraft is introduced as a text window that hardly anybody bothers to read. Who cares why I have to kill a dozen baddies anyway? Well, in The Old Republic I actually care and find myself seduced by the cinematic storytelling.