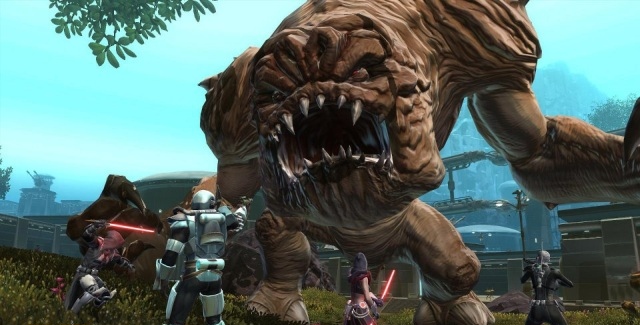 The best MMORPG of the post-WoW era

For anyone with even a faint interest in role-playing games, The Old Republic is easily worth the price of admission, as the game delivers a great starting experience. The first 20 character levels are filled with juicy motivation carrots dangling in front of the player’s nose all the time: learning the hero’s background story, gaining the first companion, leaving the starting planet, choosing an advanced class and earning a personal starship. Factor in the usual joys of playing RPGs, like leveling up, learning new abilities and equipping better gear, and the result is a high dose of addictiveness.

Not unlike real life, some of that freshness and excitement wears off once a character becomes a 20-something. But there’s always the thrill of advancing to new planets and unlocking additional companions. Those Star Wars worlds look great and offer a good visual variety, although there are few opportunities to interact with inhabitants other than quest givers and vendors.

The core gameplay – character progression and combat – is conservative almost to a fault. But after the failure of SOE’s more experimental (and less entertaining) Star Wars Galaxies MMORPG, which just shut down for good, it’s understandable why the developers stayed close to the proven formula of World of Warcraft (whose development in turn was influenced by EverQuest). Even the Emperor would be forgiving.

Talk the talk and walk the walk 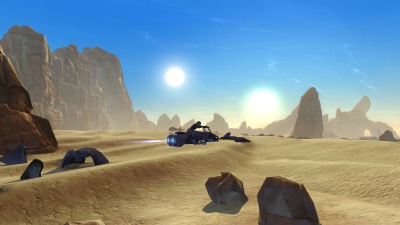 The Old Republic’s story and voiced dialogues are so well executed that I have a hard time focusing on playing just one character. The pace settles down a bit upon leaving the starting world, as the emphasis shifts from class-specific story missions to more generic world quests that are accessible to other professions as well. Still, the story arcs and their cinematic presentation set new standards for the MMORPG genre and do a great job of keeping me motivated in advancing my characters

For such a complex game the learning curve is pleasantly moderate and the user interface sticks close to MMORPG standards. The game mostly does a good job of always letting the player know where to go for mission progress. But why does the important advanced class selection require players to visit an easy-to-miss character on a space station? And for a science fiction world, there sure is a lot of running around involved to reach mission targets. Personal speeder bikes only become accessible at level 25 and the walking speed boost “Sprint” brings relief from level 14 on (the Force only knows what keeps my hero from jogging any earlier).

The game performed well during the early access period from December 13 – 19. I didn’t experience any crashes or major bugs, but had to wait up to 50 minutes in server queues during busy evening hours. The year-end holiday period will be taxing times with the influx of many new players. Bioware has already begun adding additional game servers to cope with traffic demands.

Those server queues are not the only indication that the community is strong with this one. There are already independent game databases, web comics and dozens of fan sites dedicated to The Old Republic, which is only available for Windows PCs. Minimum system requirements are higher than for World of Warcraft. 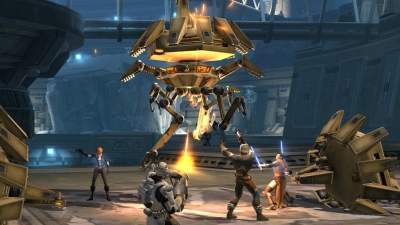 Regrettably, there are no alternatives to the “all you can play” flat rate of about $15 per month. It has to be seen how much additional content will be added to the game on a regular basis to justify this fee. Electronic Arts obviously feels that they have a premium product that wasn’t designed for the free-to-play business model. But with a mainstream license such as Star Wars, why not offer a cheaper subscription fee for a limited number of hours? Casual players who can’t sink enormous amounts of time into the game would be more willing to stick around.

How long will customers continue paying monthly fees? Are there enough interesting things to do once players hit the highest character level 50? This early in the game’s lifecycle, it’s impossible to tell. For this review, I played The Old Republic with several character classes during the late beta stages and the early access period of the release version. My impressions are based on early to mid game content. Just experiencing the different classes and their unique gameplay mechanics and stories make this game a worthwhile purchase.

The borderlines between MMORPGs and single-player games are not what they used to be. Star Wars: The Old Republic successfully blends engrossing storytelling with a persistent online world that can be explored alone or with other players. The character classes and the cinematic presentation do the Star Wars license proud. Let’s bear in mind that MMORPGs are moving targets for review scores. They are being expanded all the time and are never as “finished” as a single-player game. Based on on my first 40 hours of game play, I rate Star Wars The Old Republic 89 out of 100.